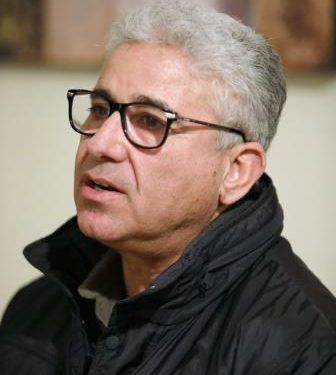 Fathi Bashagha, Interior Minister of the Tripoli-based UN-backed Government of National Accord (GNA) speaks to Reuters after escaping an assassination attempt on him, in Tripoli, Libya, February 21, 2021. REUTERS/Hazem Ahmed

Bashagha said a vehicle started encroaching on his convoy and people inside the vehicle opened fire which led to an exchange of fire in which one of his guards and one of the attackers were killed, he told media.

“It is not an incident that came by chance, but was well-planned,” Bashagha said.

His guards pursued the vehicle and it overturned, he said, adding that they arrested two people, one of whom was wanted by police.

The Stabilisation Support Apparatus, an armed force set up by outgoing Prime Minister Fayez al-Sarraj this year, said in a statement posted online that Bashagha’s guards had opened fire on one of its vehicles as it passed his convoy.

UN envoy Jan Kubis condemned the incident and called for an investigation, saying on Twitter that “such reckless acts pose threats to stability and security and aim at derailing the political process”.

The US ambassador to Libya, Richard Norland, said in a statement condemning the incident that Bashagha’s “focus on ending the influence of rogue militias has our full support”.

Beijing to Hong Kong: Ensure city is governed by patriots