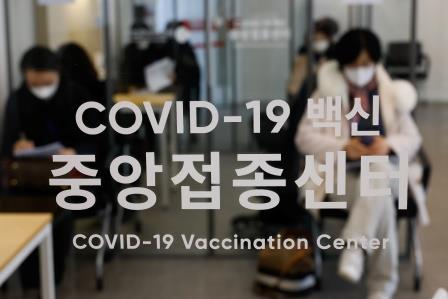 SEOUL (SOUTH KOREA) – South Korea received it’s first doses of a COVID-19 vaccine on Wednesday. In preparation for this week’s inoculation drive, AstraZeneca vaccines were transferred from a production facility in the country to a warehouse outside the capital of Seoul.

AstraZeneca shots enough for about 750,000 people will be distributed from a production facility of SK Chemicals Co Ltd unit SK bioscience to immunisation centres across the country starting on Wednesday.

Healthcare workers are scheduled to receive the first batch of AstraZeneca PLC’s vaccine from Friday, as South Korea looks to protect 10 million high-risk people by July.

“We start the first historic vaccination on Friday with the vaccines rolled out today,” Prime Minister Chung Sye-kyun told a government meeting. “This is the first step that will lead us to a long-waited return to normal.”

“The government is thoroughly preparing the entire process of vaccine roll-out from shipment to transportation, distribution, vaccination and adverse reaction management so that the public can receive the shots with confidence,” Chung said.

Seoul acting mayor Seo Jung-hyup on Wednesday said the large-scale vaccination plan will only be possible with widespread public participation.

“In order to implement the Seoul city vaccination plan according to the timetable, the trust and cooperation of citizens are absolutely necessary,” he told a briefing.

Despite concerns over the efficacy of AstraZeneca vaccine in older people, last week, a government poll showed that almost 94% of 367,000 healthcare workers aged 64 or younger in priority groups said they were ready to take the shot.