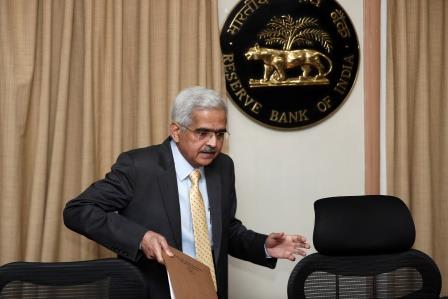 Das said that while RBI’s plans to launch its own digital currency is a “work in progress”, he had raised his concerns regarding cryptocurrencies to the government, which has largely opposed trading in private cryptocurrencies in recent years.

“Our major concern is from the financial stability angle,” Das told news channel CNBC-TV18 in an interview, adding that the RBI was “targeting to launch” a digital currency.

“It will be very difficult and not possible for me to give a date as there are several loose ends that need to be tied up and it is receiving our full attention.”

The comments come as India’s parliament is due to discuss the potential introduction of a law to ban private cryptocurrencies such as Bitcoin in the current session of Parliament, according to a legislative agenda.

An Indian government panel in 2019 recommended banning all private cryptocurrencies with a jail term of up to 10 years and heavy fines for anyone dealing in digital currencies. In 2018 the central bank told lenders in 2018 they could not offer any banking services to any cryptocurrency traders or exchanges, but the order was challenged in court and eventually reversed by the top court.

“The premise that crypto will be a competitor to the Indian rupee and so will lead to financial instability is incorrect,” said Nischal Shetty, chief executive of the WazirX cryptocurrency exchange.

“In order to ensure that there is financial stability we have the option of regulating it.”

Rashmi Deshpande, partner at law firm Khaitan & Co, which has represented crypto firms in the top court said regulate the market is the way forward.

“We have made recommendations to the government to treat crypto as an asset class just (like) other securities … which (are) then governed by the market regulator or any other regulatory body.”