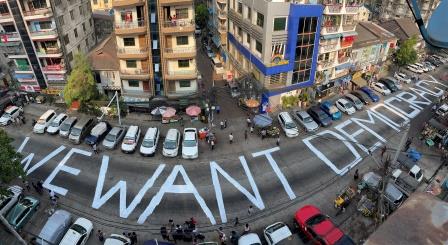 FILE PHOTO: A slogan is written on a street as a protest after the coup in Yangon, Myanmar February 21, 2021. Picture taken with iPhone panoramic mode. REUTERS/Stringer/File Photo

Myanmar’s military-appointed foreign minister, Wunna Maung Lwin, arrived in Thailand on Wednesday for talks on diplomatic efforts by the Association of South East Asian Nations, as those opposing the coup took to the streets again in Myanmar.

Myanmar’s neighbours have intensified efforts to resolve a crisis after army seized power in a Feb. 1 coup. Indonesia took the lead in efforts to steer a path out of the crisis with the help of other Southeast Asian countries but its plans appeared to falter earlier on Wednesday with the scrapping of a proposed trip to Myanmar by its foreign minister.

With the protest and a civil disobedience movement paralysing life in Myanmar, Indonesia has been trying to find a way out.

Indonesia’s efforts to resolve the crisis comes as international concern is growing.

The Group of Seven (G7) rich nations on Tuesday condemned intimidation and oppression of those opposing the coup. “Anyone responding to peaceful protests with violence must be held to account,” group foreign ministers said in a statement.

Indonesia’s foreign minister, Retno Marsudi, who is in Thailand, was expected to fly to Myanmar but that trip was off, her ministry said.

“After taking into account current developments and the input of other ASEAN countries, this is not the ideal time to conduct a visit to Myanmar,” Indonesian foreign ministry spokesman, Teuku Faizasyah, told a briefing in Jakarta.

Sources said it proposed a plan centred on ASEAN members sending monitors to ensure the generals stick to their promise to hold fair elections as the military has not given a time frame for a new election. Since a one-year state of emergency has been imposed when it seized power the elections would likely be after that.

Despite a warning from authorities that confrontation could get people killed, this week Myanmar saw huge rallies and a general strike on Monday to denounce the coup and demand the release of elected leader Aung San Suu Kyi.

“We ethnic minority people haven’t had the chance to demand our rights but now we do,” said San Aung Li, 26, a member of the Kachin minority at a proptest organised by members of minoirtes.

“So I’m supporting the protest as all ethnic people are, with one voice.”

On Tuesday, hundreds of protesters gathered outside Indonesia’s embassy in Yangon to voice opposition to a new election, demanding that the votes they cast in November be recognised.

The army seized power after alleging fraud in the November elections, detaining Suu Kyi and much of the party leadership. The electoral commission dismissed the fraud complaints.

China’s efforts to curb spread of COVID-19 in Wuhan reduced deaths from other causes: Study

China's efforts to curb spread of COVID-19 in Wuhan reduced deaths from other causes: Study