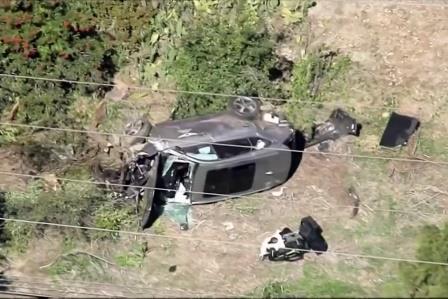 The vehicle of golfer Tiger Woods, who was rushed to hospital after suffering multiple injuries, lies on its side after being involved in a single-vehicle accident in Los Angeles, California, U.S. in a still image from video taken February 23, 2021. KNBC via REUTERS NO RESALES. NO ARCHIVES. MANDATORY CREDIT. THIS IMAGE HAS BEEN SUPPLIED BY A THIRD PARTY.

LOS ANGELES (US) – Golf champion Tiger Woods was hospitalized with severe leg injuries after his car careened off a road in Los Angeles on Tuesday and rolled down a hillside. Rescue crews had to pry him from the crash wreckage, authorities said.

Fire department officials said emergency personnel pulled Woods from the vehicle through the front windshield after the glass and its surrounding frame were cut out and removed.

Los Angeles County Sheriff Alex Villanueva told a news conference that the injuries were not believed to be life-threatening, adding that Woods was conscious and “able to communicate” when rescue personnel arrived.

The sheriff ,however, said there was no evidence of driver impairment when Woods was assessed by emergency workers at the scene. Blood samples were not drawn by investigators after he was rushed by ambulance to the Harbor-UCLA Medical Center.

Woods was the only occupant of the car when it crashed about 7:12 a.m. near the suburban community of Rolling Hills Estates, the sheriff’s department informed.

Cause of the accident is yet to be ascertained, and is under investigation, though the sheriff said weather was not a factor.

Woods’ vehicle swerved across the median strip into an oncoming lane then struck a curb and a tree as it plunged off the road and down an embankment, Villanueva said, adding “there were several rollovers” before the SUV came to rest. The sheriff said the steep and winding stretch of road “has a high frequency of accidents.”

Sheriff’s deputy Carlos Gonzales, who was the first to arrive on scene, said Woods was still wearing his seatbelt and was “calm and lucid.” The deputy said he immediately recognized the golfing great after Woods told him his name was “Tiger.”

In a statement to Golf Digest magazine, Woods’ agent, Mark Steinberg, said the winner of 15 major championships was undergoing surgery.

It was not immediately clear what effect the accident might have on his career. Tuesday’s accident was not the first auto-related mishap involving Woods.