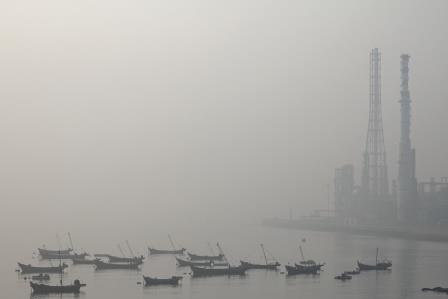 FILE PHOTO: Boats are seen at the Dalian Bay shrouded in haze on a polluted day in Liaoning province, China October 22, 2019. REUTERS/Stringer

BEIJING (CHINA) – After pollution fell significantly in the early part of 2020 due to coronavirus-related lockdowns China’s air quality targets for this year will be set at a slightly higher level than last year’s average, an official said on Thursday.

That is slightly higher than the average of 33 micrograms registered in 337 monitored cities over the whole of 2020, with capital Beijing averaging 38 micrograms last year.

“This year’s target (for achieving good air quality) looks like it is a little lower than the 2020 figure, but if you eliminate the impact of the pandemic on air quality, the PM2.5 rate would have been 35 micrograms (last year),” said Liu Bingjiang, head of the air pollution unit at the Ministry of Ecology and Environment (MEE), speaking at a regular briefing.

Liu said more work needed to be done in the coming five years to replace coal with cleaner forms of energy.

“If China doesn’t curb coal consumption growth, it will put big pressure on climate and pollution targets,” he said.

Liu noted that during the 2016-2020 period, China’s natural gas consumption grew by 150 billion cubic metres (bcm) and could grow another 120 bcm over 2021-2025. But he added this would would be “meaningless for the climate target” if it isn’t used to replace coal.