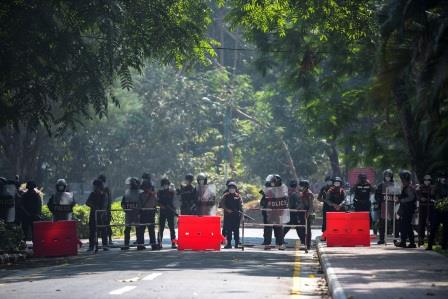 Riot police officers stand guard during a rally against the military coup at the University of Yangon, in Yangon, Myanmar, February 25, 2021. REUTERS/Stringer

The World Bank said it would not process requests for funds made after the Feb. 1 coup. It has halted payments to projects in Myanmar on withdrawal requests that were made after the coup, the bank said in a letter to Myanmar’s finance ministry.

World Bank President David Malpass said last week it was taking an “extra cautious” approach to Myanmar but was continuing to execute past projects, including emergency coronavirus relief.

Last year, the World Bank approved more than $350 million in new loans and grants to help Myanmar deal with the coronavirus and to support farmers and rural employment.

The Southeast Asian country has been in crisis since the army seized power and detained civilian government leader Aung San Suu Kyi and much of her party leadership after the military complained of fraud in a November election.

There have been daily protests and strikes by democracy supporters for about three weeks, often drawing hundreds of thousands of people across the diverse country. The confrontation illustrates the defiance the military is facing in various walks of life as it seeks to reimpose its authority on a population that had been growing used to civilian rule under Suu Kyi’s government.

In another example of defiance media organisations said on Thursday they would not comply with an order to refrain from using words like “coup” to refer to the ouster of the elected government.

The crisis raises the prospect of growing international isolation and investor jitters compounding difficulties for an economy already weighed down by the coronavirus.

The United States, Britain and others have called for Suu Kyi’s release and the restoration of democracy, and have imposed limited sanctions aimed at the junta and its business links.

The army has promised a new election after reviewing voter lists. It has not given a date but it imposed a one-year state of emergency when it seized power.