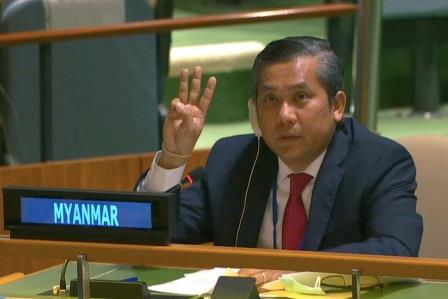 Myanmar's ambassador to the United Nations Kyaw Moe Tun holds up three fingers at the end of his speech to the General Assembly where he pleaded for International action in overturning the military coup in his country as seen in this still image taken from a video, in the Manhattan borough of New York City, New York, U.S., February 26, 2021. United Nations TV/Handout via REUTERS

In a bid to prevent protesters from gathering, Myanmar police moved decisively on Saturday, after Myanmar’s UN envoy urged the United Nations to use “any means necessary” to stop the coup.

At the UN General Assembly, Myanmar’s Ambassador Kyaw Moe Tun said he was speaking on behalf of Suu Kyi’s government and appealed to the body “to use any means necessary to take action against the Myanmar military and to provide safety and security for the people”.

Kyaw Moe Tun appeared emotional as he read the statement on behalf of a group of elected politicians that he said represented the legitimate government.

“We need further strongest possible action from the international community to immediately end the military coup, to stop oppressing the innocent people … and to restore the democracy,” he told the 193-member group, receiving applause as he finished.

Delivering his final words in Burmese, the career diplomat raised the three-finger salute of pro-democracy protesters and announced “our cause will prevail”.

UN Special Rapporteur Tom Andrews said he was overwhelmed as he watched the ambassador’s “act of courage”.

“Despite enormous pressure to do otherwise, he spoke up for the people of Myanmar and against an illegal coup. It’s time for the world to answer that courageous call with action,” Andrews said on Twitter.

UN special envoy on Myanmar Christine Schraner Burgener called for a collective “clear signal in support of democracy”, saying no country should recognise or legitimise the junta.

Police were out in force early in the main city of Yangon and elsewhere, deployed at usual protest sites and detaining people as they congregated, witnesses said.

People still gathered, their numbers building through the morning, to chant and sing, then melting away into side streets as police advanced, apparently setting off stun grenades and firing into the air.

The Southeast Asian country has been in turmoil since the army seized power and detained elected leader Aung San Suu Kyi and much of her party leadership, alleging fraud in a November election her party had won in a landslide.

The coup has brought thousands of protesters to Myanmar’s streets who have been demanding the release of Suu Kyi, 75. It has also drawn condemnation from Western countries, with some imposing limited sanctions.