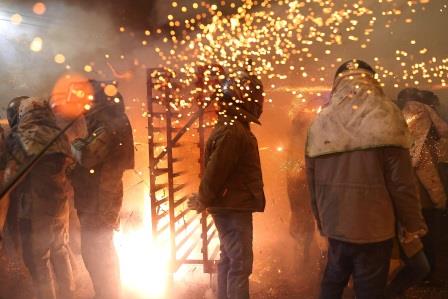 Participants wearing motorcycle helmets get sprayed with firecrackers, during the 'Beehive Firecrackers' festival at the Yanshui district in Tainan, Taiwan February 26, 2021. REUTERS/Ann Wang

ANSHUI (TAIWAN) – Taiwanese celebrated the Beehive Fireworks Festival in Yanshuia. This year cacophonous traditional festival in the island’s south was pared back due to the pandemic but still allowed to go ahead due to Taiwan’s low case numbers.

The festival is renowned for its noisy and fiery atmosphere – participants wear motorcycle helmets and thick coats to avoid being injured as the streets are bombarded with fireworks and firecrackers.

Held to coincide with Lantern Festival, which marks the final day of the Lunar New Year celebrations, the event had been in doubt due to government worries about COVID-19, though Taiwan has fewer than 30 active cases.

But the Tainan government allowed it to go ahead, albeit with fewer revellers permitted to attend.

Weng Tsai-chin, chairman of the Yanshui Wu Temple, said in previous years up to 200,000 came to the festival, with the number dramatically smaller this year.

“Although you don’t see too many people here, there are lots of people watching the live stream at night,” he said.

The festival gets its name from the thousands of rockets which are set off from decks along the street at the same time, creating a huge roar that is supposed to sound like bees.

The festival originated in the late 19th century during a cholera epidemic, when fireworks were set off to drive away the sickness, with residents appealing to the god of war to help them in their time of crisis.

“Many people supported the festival to be continued this year and we cannot stop holding the festival,” said resident Ah Hsien, 18. “We especially need to have it now during the prevention of the epidemic. This is a culture to eliminate the plague.”