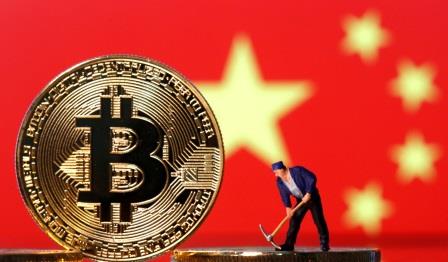 FILE PHOTO: A small toy figurine is seen on representations of the Bitcoin virtual currency displayed in front of an image of China's flag in this illustration picture, April 9, 2019. REUTERS/Dado Ruvic/Illustration

Brushing aside worries over the volatility and the recent sell-off, he said: “This market is for the big hearts.”

Exchanges such as Binance and MXC bar the use of yuan and only allow trading between cryptocurrency pairs, such as bitcoin versus the dollar-linked stablecoin tether (USDT).

But Chinese investors can use peer-to-peer markets to buy USDT using yuan, with payment made via bank cards or online transfers. This process does not violate Chinese laws.

Chinese individuals appear to be moving capital overseas under official quotas to obtain their USDT, under the guise of making medical or other legitimate purchases, a regulatory source told Reuters. The loophole allows investors to get around China’s strict capital controls.

“You cannot stop people from trading bitcoin, because Chinese law recognises the value of virtual assets. Anything with value should be allowed to change hands,” Huang said.

The absence of data and investor information on those exchanges, however, complicates China’s anti-money laundering efforts and blunts the effectiveness of capital controls, the lawyer said.

In 2020, $17.5 billion worth of digital assets flowed out of Chinese exchanges to foreign venues, 53% more than in the previous year, suggesting a rise in capital flight out of China, consultancy PeckShield said in its anti-money laundering report.

Changhao Jiang, co-founder and CTO of Cobo, a Chinese cryptocurrency custodian and digital wallet provider, saw a jump in business this year.