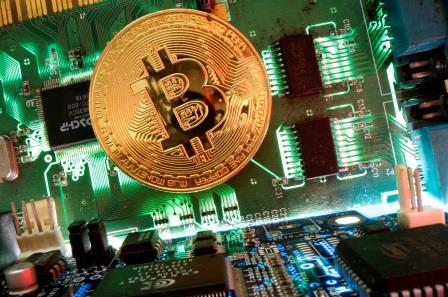 FILE PHOTO: Representation of the virtual currency Bitcoin is seen on a motherboard in this picture illustration taken April 24, 2020. REUTERS/Dado Ruvic/Illustration

BEIJING (CHINA) – China’s Inner Mongolia which was the only one of 30 mainland areas under Beijing’s energy consumption and energy intensity review that failed to meet the targets in 2019, will end all cryptocurrency mining projects and stop reviewing new projects in industries which consume large amounts of energy, such as steel, coke and methanol production, in a bid to meet energy efficiency targets.

The region had drawn criticism from the central government in September due to its poor achievement.

Now China’s No.2 coal mining region, a major energy consumer, aims to cap energy consumption growth at around 5 million tonnes of standard coal equivalent in 2021, according to a draft rule issued by the regional state planner.

It also plans to cut energy intensity, or the amount of energy consumed per unit of economic growth, by 3% from 2020 levels.

All cryptocrurrency mining projects – which require huge amounts of computing power and hence use large amounts of energy – will be shut down by the end of April this year.

Small firms with outdated technology in the steel, ferroalloy, coke, graphite electrode and coal-fired power sectors have also been given a timetable to close by the end of 2022.

“(Inner Mongolia) will tighten its energy control measures and bear the targets throughout all economic and social aspects,” said the draft rule, adding it will strictly curb blind expansion at firms which consume a lot of energy.

The region has also vowed to increase the share of renewable energy in its power portfolio, aiming to install more than 100 gigawatts of renewable generation capacity by 2025.

China appears to have missed its target for cutting energy intensity set for 2016-2020, according to Reuters calculation based on official data.