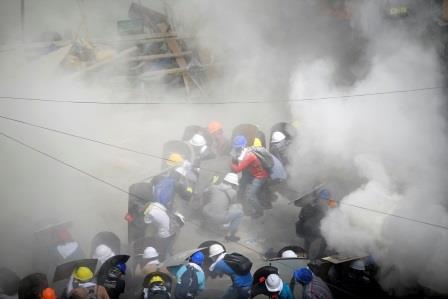 Tear gas and fire extinguisher gas float around protesters as they take shelter behind shields while clashing with riot police officers during a protest against the military coup in Yangon, Myanmar, March 1, 2021. REUTERS/Stringer

Myanmar’s ousted leader Aung San Suu Kyi appeared at a court hearing via video conferencing on Monday. Suu Kyi, aged 75, looked in good health during her appearance before a court in the capital Naypyidaw, one of her lawyers said. This was the first time her lawyers had seen her since she was detained in the Feb. 1 military coup.

Two more charges were added to those filed against her after the coup, her lawyer said.

“I saw A May on the video, she looks healthy,” lawyer Min Min Soe told media, using an affectionate term meaning “mother” to refer to Suu Kyi.

“She asked to meet her lawyer.”

She was initially charged with illegally importing six walkie-talkie radios. Later, a charge of violating a natural disaster law by breaching coronavirus protocols was added.

On Monday, two more charges were added, one under a section of a colonial-era penal code prohibiting publication of information that may “cause fear or alarm”, and the other under a telecommunications law stipulating licences for equipment, the lawyer said.

The next hearing will be on March 15. Critics of the coup say the charges were trumped up.

Myanmar has been in chaos since the military seized power after alleging fraud in a November election won by the NLD in a landslide, with daily protests getting increasingly violent as police and troops try to stamp them out.

Police in the main city of Yangon used stun grenades and tear gas to disperse hundreds of protesters on Monday, witnesses said.