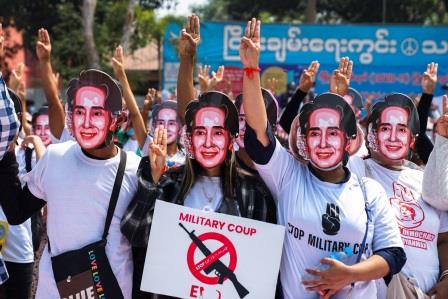 Myanmar protest turned violent once again on Tuesday as police fired stun grenades to disperse protesters in the city of Yangon, according to witnesses.

Most protesters gathered wearing hard hats and clutching makeshift shields, behind barricades in different parts of Yangon to chant slogans against military rule. Crowds also gathered in other parts of the country, media reported.

“If we’re oppressed, there will be explosion. If we’re hit, we’ll hit back,” the crowd chanted at one Yangon protest before police moved in to break up it up with stun grenades, witnesses said.

There were no reports of any injuries.

The protests took place as foreign ministers of neighbouring countries were due to hold talks with the military in an effort to quell deadly violence.

The talks will come two days after the bloodiest day of unrest since the military removed Aung San Suu Kyi’s elected government a month ago, unleashing anger and mass street protests across Myanmar.

Singapore Foreign Minister Vivian Balakrishnan said his counterparts in the Association of Southeast Asian Nations (ASEAN) would be frank when they meet by video call on Tuesday and will tell a representative of Myanmar’s military they are appalled by the violence.

In a television interview late on Monday, Balakrishnan said ASEAN would encourage dialogue between Suu Kyi and the junta.

“They need to talk, and we need to help bring them together,” he said.

Philippine Foreign Minister Teodoro Locsin indicated on Twitter that ASEAN would be firm with Myanmar and said the bloc’s policy of non-interference in members’ internal affairs “is not a blanket approval or tacit consent for wrong to be done there”.

ASEAN’s effort to engage with Myanmar’s military has been criticised by supporters of democracy, with a committee of ousted Myanmar lawmakers declaring the junta a “terrorist” group and saying ASEAN’s engagement will give it legitimacy.

Sa Sa, the committee’s anointed envoy to the United Nations, said ASEAN should have no dealings with “this illegitimate military-led regime”.

The alumni of ASEAN youth programmes in Myanmar said the bloc should be talking to the international representatives of Suu Kyi’s administration, not to the regime.

“ASEAN must understand that the coup or the re-election promised by the military junta is utterly unacceptable to the people of Myanmar,” it said it a letter to ASEAN.