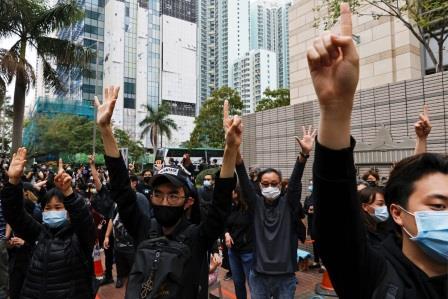 FILE PHOTO: Supporters of pro-democracy activists raise their hands in a symbol of the "Five demands, not one less" as they queue for a court hearing over the national security law outside West Kowloon Magistrates' Courts, in Hong Kong, China March 1, 2021. REUTERS/Tyrone Siu/File Photo

HONG KONG: Bail proceedings for 47 Hong Kong democracy activists charged with conspiracy to commit subversion enter the third day on Wednesday, following marathon hearings that have gone on late into the night and led to some defendants falling ill.

The charges are the most sweeping use yet of the national security law that Beijing imposed on the global financial hub in June 2020.

Defence lawyers are applying for bail and challenging a prosecution bid to keep the defendants in custody for months while police investigate further. The hearing resumes at noon.

The marathon hearings, unusual in length, have seen five of the defendants falling ill and needing medical assistance over the first two days. Hong Kong laws restrict media coverage of the content of bail hearings.

Foreign diplomats and rights groups are closely monitoring the case amid mounting concerns over the independence of the former British colony’s vaunted judicial system that is seen as the foundation on which its financial prowess was built.

“We’ve not seen something like this before. It’s usually very fast … It’s very strange,” said Consul General of Ireland David Costello, who was at the court, of the length of the hearings.

“It’s a test of what’s going to happen in Hong Kong.”

In contrast with Hong Kong’s common law traditions, the new security law puts the onus on defendants to prove they will not pose a security threat if released on bail.

If remanded to custody, the move will mean that most of Hong Kong’s opposition figures are either in jail or in exile.

The activists are accused of organising and participating in an unofficial primary poll last July that authorities said was part of a plan to “overthrow” the government.

The election was aimed at selecting the strongest candidates for a legislative council election that the government later postponed, citing the coronavirus.