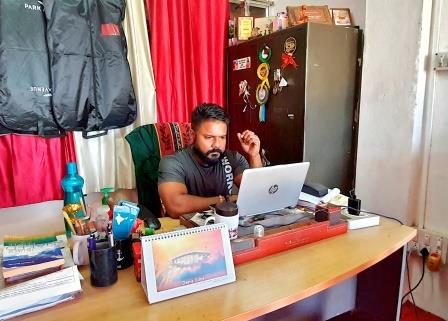 “Please help me… Many people may die,” this is what Denis Giles heard from the other end of the phone. Denis, the editor of a small Indian newspaper, received a phone call as he sat typing in his one-room office in Port Blair.

The caller, Mohammed Siddiqui, was frantic and largely incoherent. As Giles was about to hang up Siddiqui pleaded in broken hindi for help.

He then told Giles to spread the word of dozens of Rohingya Muslims fleeing Bangladesh for Malaysia aboard a crippled fishing boat in the Andaman Sea. Eight of the passengers had already died.

“You can help me save lives,” Siddiqui told Giles, who publishes the English-language Andaman Chronicle.

Siddiqui’s brother and the other Rohingya passengers had paid human traffickers to smuggle them to Malaysia from cramped refugee camps in southern Bangladesh that are home to more than a million Rohingya refugees from Myanmar.

“No one knew of the boat until the engine developed a snag and it drifted near Indian waters,” Siddiqui said. “That was when I got to know that my brother was stuck on a boat with 80 survivors and that eight were dead due to extreme dehydration or hunger,” Siddiqui, who lives in Australia, told in an interview.

He tried to reach the Bangladesh Coast Guard and other agencies. However, there was no response. “Finally I decided to call some journalists and based on the GPS coordinates I realised the only person who could help was someone based in the Andaman Islands,” Siddiqui said.

Siddiqui, who was given the coordinates by the fishing boat captain, passed them to Giles, who was the first person to call the Indian Coast Guard to alert them. That was Feb. 19.

“I told them people are dying they must send ships to help them but Indian officials instead suggested I send them details via email,” said Giles.

He fired off an email with the coordinates of the boat that was adrift roughly 235 km (150 miles) northeast of Port Blair, said Giles in an effort to explain the urgency.

Giles, who published a story about the refugees on Feb. 21, said he only received a call from the coast guard on Feb. 23 to inform him that a rescue was under way.

The boat has been located. India’s foreign ministry confirmed the boat had been found and that two Coast Guard ships were helping those on board and repairing the vessel so that it could return safely to Bangladesh. However, the fate of the passengers remains far from certain.

“I hope the Rohingya receive a warm welcome from a country at the earliest,” said Giles. “The sea is not their home.”

Japan mulls over decision to let in overseas spectators for Olympics: officials