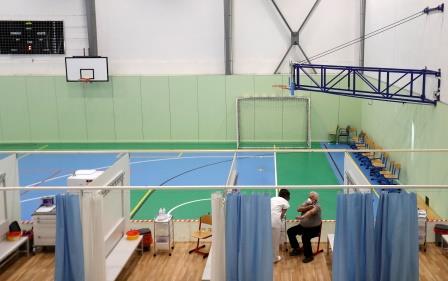 FILE PHOTO: A man receives a shot of the coronavirus disease (COVID-19) vaccine during a trial run of a mass vaccination center located inside a gym in the town of Ricany near Prague, Czech Republic, February 25, 2021. REUTERS/David W Cerny/File Photo

Health Minister Jan Blatny said “An offer arrived from this country from an intermediary, for a purchase from India,” he said on Twitter.

“It concerned a batch that does not have a permission for the European Union,” he said.

Prime Minister Andrej Babis later said he did not take the offer – or a similar proposition last month – seriously.

AstraZeneca said there should be no private sector supply for sale or distribution of the vaccine in Europe.

“If someone offers private vaccines, it is likely counterfeit, so should be refused and reported to local health authorities,” a company spokesman said.

AstraZeneca has licensed the Serum Institute of India (SII), the world’s largest vaccine maker, to manufacture the shot mainly for poor and middle-income countries. A spokesman for SII said the company has not authorized any party in the UAE to act as a reseller on its behalf.

The number of infections, hospitalised patients and deaths in the Czech Republic, a country of 10.7 million, has spiked in recent days. The country ranks among the worst-hit places in the world.

The government deployed more police officers and soldiers on Monday to help enforce new lockdown measures that seek to confine people mostly to their home districts.

Last month, Babis said in parliament that he and three other prime ministers in Europe had been offered AstraZeneca shots by a Dubai intermediary but he did not consider the offer to be reliable.