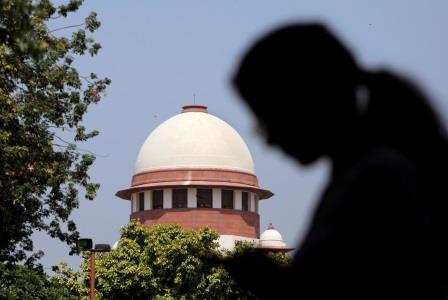 A woman checks her mobile phone inside the premises of the Supreme Court in New Delhi, India, September 28, 2018. REUTERS/Anushree Fadnavis - RC13B8E9E250

CHENNAI (INDIA) – India’s chief justice is under pressure to resign after asking a man accused of rape whether he would marry the complainant – sparking outrage and concern that his words could legitimise the notion that rapists can make amends by marrying their victims.

Chief Justice Sharad Arvind Bobde posed the question during the bail hearing of a government employee who is accused of stalking, threatening and repeatedly raping a distant schoolgirl relative over a two-year period.

“This idea of marrying the rapist was always whispered in the corridors and not spoken about loudly. Now that it has been said aloud, how it will be used across the judiciary and by (those) accused is a terrifying thought,” she said.

“People approach courts for justice and not to listen to the petty mindedness of judges.”

This week’s incident has also fueled debate about India’s progress on tackling high rates of sexual violence nearly a decade since the gang rape and murder of a student on a bus shocked the nation.

Almost 34,000 rapes were reported in 2018, about the same as the previous year, and just over 85% led to charges and 27% to convictions, according to government crime data.

In an open letter demanding Bobde’s resignation, thousands of people and women’s rights organisations said his remark would “lead to the further silencing of girls and women, a process that took decades to break”.

“Your continued presence as CJI (Chief Justice of India) puts every woman in India in danger. It sends a message to young girls that their dignity and autonomy are of no value,” the letter said.

Lawyers said Bobde’s comment could threaten a precedent set by the Supreme Court in 2013 when it said “rape is not a matter for the parties to compromise and settle” – seeking to stamp out a notion that persists in many segments of Indian society.

“The rule of law is at stake here,” said lawyer D Gita, who practises in the Madras High Court.

“How will a woman feel that she will get a fair hearing or even justice if the court echoes a sentiment that is often heard within families and society. The remarks have upturned the legal apple cart and sent a terrible signal to the lower judiciary.”

Suman Chakravarti, another lawyer, has argued in many cases against the “marry your rapist ploy”, which defence attorneys representing rape defendants sometimes use in a bid for leniency from judges.

In July, a year after Catholic priest Robin Vadakkumchery, 52, was jailed for 20 years for raping a minor, he asked Kerala High Court to grant him bail – saying he wanted to marry the girl and take care of the child she conceived.

“The fact that he would make such a suggestion in itself was outrageous,” Chakravarti, who was the public prosecutor in the Vadakkumchery case said.

“This is a shortcut method we often see to escape this serious crime,” he added.

The court denied Vadakkumchery’s application, but Chakravarti said vigilance was necessary to ensure the legal system does not accept the so-called marriage ploy.

There have been numerous cases of rape victims forced or pressured to marry their attackers by relatives or members of traditional panchayats, which serve as village courts, said Jacqui Hunt, director of rights group Equality Now’s Eurasia Office.

“Judges, tasked with upholding constitutional rights and values, are the last people who should champion such marriages,” Hunt said.