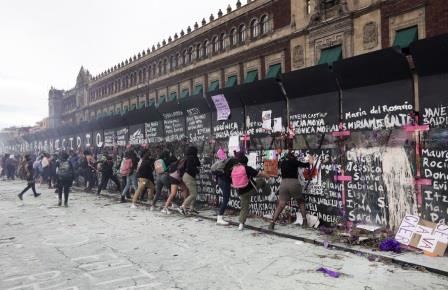 MEXICO CITY (MEXICO): Women across Mexico protested on Monday against the violence they face on a daily basis, fueled by what they say is an out of touch government, and President Andres Manuel Lopez Obrador’s support for a politician accused of rape. The marches to mark International Women’s Day were smaller in size than last year’s demonstrations, likely because of concerns about the coronavirus pandemic.

At the national palace, where Lopez Obrador resides, protesters painted the names of hundreds of femicide victims across 10-foot-tall (3-meter) metal barriers erected last week to protect the historic building from protesters.

Demonstrators ripped down a section of the barrier and spray-painted sidewalks, kiosks and business facades from the Revolution monument to the historic center with graffiti accusing the government of not doing enough to prosecute femicides and commemorating murdered women.

Their messages read “Macho AMLO”, in reference to Lopez Obrador, and “We’re not all here.”

“I’m here so my voice is heard, so justice is done. Yesterday it was my daughter. Tomorrow it could be another girl,” said 39-year-old Irma Quesada.

She said her 12-year-old daughter was still recovering in hospital after being raped and stabbed in the face last week by a 45-year-old man, who is now in jail but who authorities have warned may not stay behind bars because of a lack of evidence.

According to public policy think tank Mexico Evalua, which analyzed government data, five million women were victims of sexual violence in the second half of 2020 in Mexico, including harassment, sexual abuse, attempted rape or rape, the vast majority of which did not get reported.

Mexican government data shows at least 939 cases of femicide, murders that specifically targeted victims because they were women, occurred last year. The crime rose nearly 130% between 2015 and 2020.

Activists also projected feminist slogans in bright lights across the barricaded palace facade, including a message saying “a rapist will not be governor,” referring to Felix Salgado, a gubernatorial candidate for Guerrero state.

Lopez Obrador has for weeks stood by Salgado, his party’s candidate in midterm elections in June, describing the calls for him to step down over rape allegations as politically motivated.

Guerrero prosecutors are investigating one accusation of rape against Salgado, after earlier this year dropping a probe into another accusation that they say was filed too long after the alleged crime.

Salgado has not responded to requests for comment, but Mexican media has reported that he has denied the allegations.

Thousands of women flocked to the streets a year ago to demand a tougher government response against femicides, with some demonstrators chucking Molotov cocktails at the national palace and vandalizing buildings in what were otherwise peaceful protests.