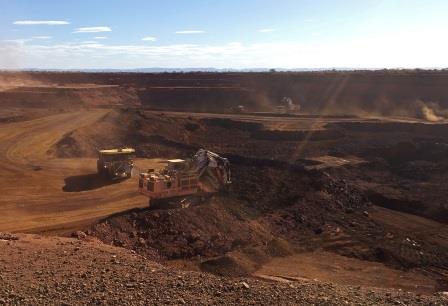 FILE PHOTO: An autonomous truck readies to pick up a load of iron ore at Australia's Fortescue Metals Group (FMG) Chichester Hub, which includes the Christmas Creek iron ore mine, in the Pilbara region, located southeast of the coastal town of Port Hedland in Western Australia, November 29, 2018. REUTERS/Melanie Burton

MELBOURNE (AUSTRALIA) – Miners in Western Australia’s iron ore heartland will now be rated by an Aboriginal group. The group said it has planned a scorecard to rate on how well they comply with various environmental, social and governance metrics.

The Wintawari Guruma Aboriginal Corp (WGAC), which represents the Eastern Guruma region in the Pilbara, said it hoped the move would help educate investors and the broader public after the destruction of ancient rock shelters by Rio Tinto last year.

“It’s not easy for people to hear from the native title holders, so you tend to get just the mining company’s view of the world,” director Tony Bevan said.

The scorecard would also provide feedback in a way that could be acted on by miners.

“The intent is for it to be a positive and proactive process,” Bevan said.

WGAC will assess miners’ performance over the course of a year based on 34 questions, then publish the results and provide feedback.

More than 93% of Eastern Guruma country is covered by mining tenements, making it one of the most heavily explored regions in Australia, WGAC said. Rio Tinto and Fortescue Metals Group are the two biggest miners in the region.

Rio operates six mines and three rail lines in the region and Fortescue operates the large Solomon mine and a rail line. Both companies are seeking approvals for significant expansions of their operations, WGAC said.

Rio Tinto said that it was looking forward to working with the Wintawari Guruma on the initiative.

“Rio Tinto is committed to being a trusted partner for Traditional Owners, Indigenous peoples and host communities,” it said in a statement to Reuters.

Bevan said WGAC could help other Indigenous groups develop similar scorecards and was open to speak with the miners about the metrics and rating process.

“The more transparent we can be, in terms of our process, the better the outcome will be,” he said.