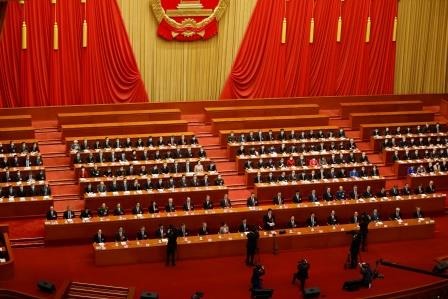 BEIJING (CHINA): A draft decision to change Hong Kong’s electoral system, which will further reduce democratic representation in the city’s institutions has been approved by the Chinese parliament. The decision is considered as a mechanism to vet politicians’ loyalty to Beijing.

Consolidating Beijing’s authoritarian grip over the global financial hub is also considered as one of the motives behind the government taking such measures. However, they are a result of the imposition of the national security law in June, which critics see as a tool to crush dissent.
The measures will alter the size and composition of Hong Kong’s legislature and an electoral committee selecting the chief executive in favour of pro-Beijing figures.

Beijing is responding to pro-democracy protests in Hong Kong in 2019, which it saw as a threat to China’s national security. Since then, most high-profile democratic politicians and activists have been sent to jail or are in self-exile.

“The central authorities have good intentions,” the Liaison Office, Beijing’s representative body in Hong Kong, said. adding, “We expect all sectors of the community and the general public to take ownership of the work to amend the law and offer suggestions so that a strong positive energy can be gathered under the banner of patriotism and love for Hong Kong.”