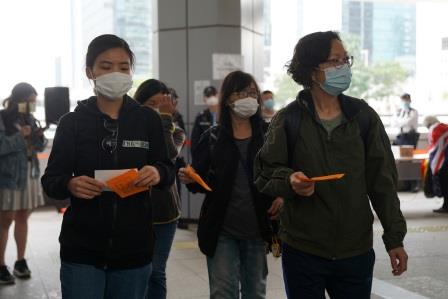 Supporters of pro-democracy activists hold public admission tickets for a court hearing on the appeal against the bail release of 11 activists charged with national security violations, at the High Court in Hong Kong, China March 11, 2021. REUTERS/Lam Yik

HONG KONG: One activist charged with conspiracy to commit subversion was released on bail by Hong Kong’s High Court on Thursday. The court, however, remanded another in a widely monitored case that saw the most sweeping use yet of the city’s national security law.

Former opposition lawmaker Helena Wong was released on bail on Thursday as the High Court rejected the appeal. Community-level democratic politician Ng Kin-wai was remanded in custody. The court will publish its reasons later. The conditions for Wong’s bail included not threatening national security, participating in any elections, or contacting foreign officials, as well as surrendering all travel documents, observing a curfew and reporting to police regularly.

Nine others are set to appear in court in two batches on Saturday and Monday.

The High Court was ruling on an appeal by prosecutors against a lower court’s decision to grant bail to the activists.

The case offers an insight into how the security law drafted by China clashes with the global financial hub’s common-law traditions. Activists will be held in custody for months until their trial begins as per the new law.

Foreign diplomats and rights groups are closely watching proceedings as concerns mount over the vanishing space for dissent in the former British colony, which has taken a swift authoritarian turn since the imposition of the law in June 2020. The detentions have been fiercely criticised by governments in the West, including in Britain and the United States.

In contrast with past practice, the new security law puts the onus on defendants to prove they will not pose a security threat if released on bail.