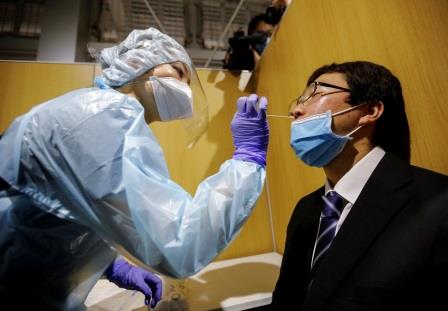 A decision on whether the state of emergency could be lifted in the Tokyo area, which accounts for about 30% of Japan’s population, would ultimately be made after hearing the views of experts, Tamura said in televised remarks.

“Lifting the measures will be based on putting in place a system to ensure there’s not a rebound in cases,” he said.

Restrictions such as shorter business hours for restaurants and bars have helped reduce new cases in Tokyo to roughly a tenth of a peak of 2,520 cases on Jan. 7. But the numbers are far from Tokyo Governor Yuriko Koike’s target of bringing the seven-day average to 70% of the preceding week.

“The number of new positive cases has stopped decreasing, and we need to be very vigilant about the possibility of a resurgence due to mutated strains,” Koike said on Friday during a meeting with health experts.

As part of its preparation to host the Summer Olympics, Japan is racing to bring COVID cases under control and vaccinations well under way.

Japan’s COVID-19 inoculation campaign began only last month with health workers and has been moving slowly, hampered by a lack of supply.

Japan expects to receive 9,188 cartons of vaccine developed by Pfizer Inc and BioNTech SE each week in May, or about 1.8 million vials, up from 10,475 cartons for all of April, said Taro Kono, the minister in charge of the vaccination effort.

“In May, we will receive 9,188 boxes each week. That will roughly be worth about 10 million shots a week,” Kono told a news conference. “We expect June volume will be even bigger than May.”