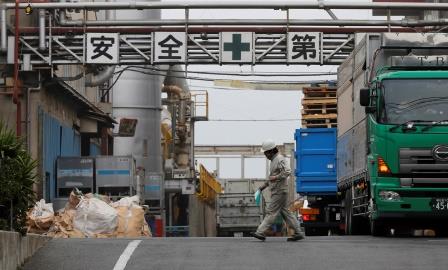 FILE PHOTO: A worker walks at a factory in Tokyo March 29, 2013. REUTERS/Toru Hanai

TOKYO (JAPAN) – A poll by popular news agency found that Japan’s core machinery orders likely dropped in January from December’s level, predicting the first monthly decline in four months. The slump is as a result of renewed emergency curbs to slow the spread of COVID-19.

The economy is widely viewed to be shrinking in the current quarter as the anti-virus restrictions have hurt consumer spending and firms, especially in the service sector.

Core machinery orders likely fell 5.5% in January from December, the poll of 19 economists found, this is regarded as an indicator of capital spending for the next six to nine months.

Core orders, which excludes orders from shipbuilders and electric utilities, were forecast to have slipped 0.2% in January from the same month a year ago.

The poll showed exports in February were expected to have dropped 0.8% from year-ago levels. It would be the first decline in three months, but that was partly due to Lunar New Year holidays falling in February this year, having fallen in January last year.

“But non-manufacturers turned cautious as renewed curbs to contain the pandemic could damage the economy.”

The government will release core orders data at 8:50 am Japan time on Monday (2350 GMT on Sunday ).

Trade data is set to be released on Wednesday.

Imports are forecast to have grown 11.9% in February from a year earlier, resulting in a trade surplus of 420 billion yen ($3.86 billion).

Consumer price index (CPI) data, due to be released next Friday, is expected to show a 0.4% fall in February, compared with a 0.6% fall in January.