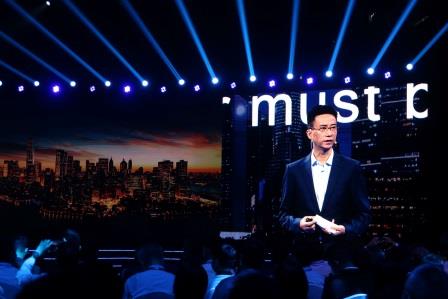 Simon Hu, CEO of Ant Group, is seen on a giant screen as he delivers a speech at the INCLUSION Fintech Conference in Shanghai, China September 24, 2020. REUTERS/Cheng Leng

China’s Ant Group CEO Simon Hu has unexpectedly quit amid a regulatory-driven overhaul of the fin-tech giant’s business. This is the first top management exit since a failed $37 billion initial public offering.

Hu, who was named chief executive of the Alibaba Group Holding affiliate in 2019, will be replaced by company veteran and Executive Chairman Eric Jing, Ant said in a statement on Friday.

Hu’s exit from the company comes as Ant is working on plans to shift to a financial holding company structure following intense regulatory pressure to subject it to rules and capital requirements similar to those for banks.

That pressure abruptly scuttled Ant’s IPO last year, which would have been the world’s biggest.

Hu resigned for personal reasons, Ant said in a statement, without elaborating.

“Following the board’s thorough discussions, we have decided to respect Simon’s personal request and support him fully in his new mission,” Jing said in an internal memo.

Jing will continue in his current role as chairman, he said.

U.S.-listed shares in billionaire Jack Ma’s Alibaba dropped as much as 3.9% in the morning trade on Friday.

Hu’s departure is the first major management change since the IPO was scrapped. He was one of the key executives responsible for managing the company’s mega dual-listing in Hong Kong and Shanghai.

Ma’s business empire has been at the centre of a crackdown following an Oct. 24 speech in which he blasted China’s regulatory system.

Regulators have since been tightening scrutiny of the country’s technology sector, with Alibaba taking much of the heat. The regulator launched an official anti-trust probe into Alibaba in December.

Ma, who is not known for shying away from the limelight, disappeared from the public eye for about three months, prompting frenzied speculation about his whereabouts. He re-emerged in January in a 50-second video appearance.

Ant’s financial holding structure is expected to weigh on its valuation, as the fintech firm was valued as a technology firm in its previous fundraising rounds. Typically, valuations are much higher on technology firms than on financial companies.

The change in management also comes days after some Ant staff expressed frustration on social media for not being able to sell the company shares they own after Chinese regulators abruptly halted the company’s market debut.

Jing told Ant employees that the company would review its staff incentive programmes and roll out some measures starting from April to help solve their financial problems, according to two people who saw the messages.

The listing in November of Ant, whose businesses include consumer lending and insurance products distribution, would have made some of the company’s employees millionaires or billionaires.

Although Ma has stepped down from corporate positions and earnings calls, he retains significant influence over Alibaba and Ant and promotes them globally at business and political events.

Hu joined Ant in 2005 and has worked in various roles in the group as well as at Alibaba, according to his LinkedIn profile.

Jing has been Ant’s executive chairman since 2018 and before that he held various positions at the company including president and chief operating officer, according to his profile on the World Bank website. He joined Alibaba in 2007.