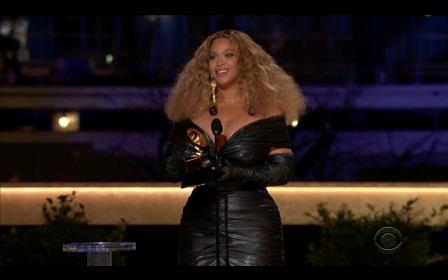 Beyonce wins the Grammy for Best R&B Performance for "Black Parade" in this screen grab taken from video of the 63rd Annual Grammy Awards in Los Angeles, California, U.S., March 14, 2021. CBS/Handout via REUTERS

LOS ANGELES (US) – Beyonce became the most awarded female artist in Grammy history at the ceremony on Sunday. Taylor Swift’s surprise lockdown record “Folklore” was named album of the year and Billie Eilish’s “Everything I Wanted” won record of the year.

Beyonce’s four Grammys on Sunday took her total career wins to 28, surpassing the previous record for a woman set by bluegrass singer Alison Krauss and Swift’s win made her the first woman to take home album of the year three times.

The writers of “I Can’t Breathe” by R&B artist H.E.R won song of the year. It was written in response to the Black Lives Matter protests in the United States last summer.

Hosted by Trevor Noah, the hybrid ceremony was packed with pre-recorded and live performances by the likes of Lipa, Taylor Swift, Post Malone, Cardi B, DaBaby, Black Pumas and Mickey Guyton.