Toyota provides a hike of 9,200 yen, will come to effect from April 1 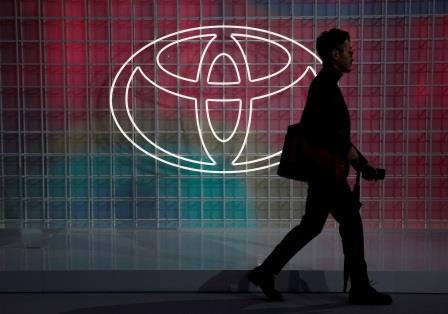 FILE PHOTO: A man walks past a Toyota logo at the Tokyo Motor Show, in Tokyo, Japan October 24, 2019. REUTERS/Edgar Su

TOKYO (JAPAN) – Toyota Motor Corp has announced a hike of 9,200 yen ($84.33) in line with what the union had demanded and higher than last year’s agreed pay rise of 8,600 yen per month. This average annual pay raise per month will start from April 1.
After signing the wage agreement, Masanori Kuwata, chief human resources officer of Toyota said that it is an initiative towards the company’s ambition to lead the auto industry not just in Japan’s wage negotiations, but in carbon neutrality and digitalisation as well.
Japanese companies are set to offer the lowest wage increases in eight years as labour talks wrap up on Wednesday, in a sign the COVID-19 pandemic is putting an end to the benefits brought on by former premier Shinzo Abe’s stimulus policies.