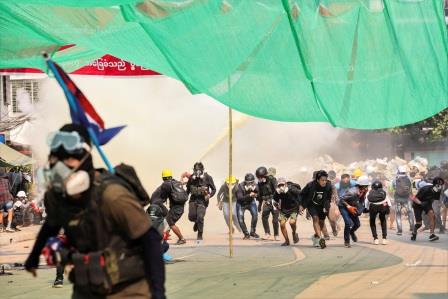 Authorities have restricted the internet services protesters use to organise, with access to Wi-Fi in public areas largely shut off by Thursday. Residents of some towns, including Dawei in the south, reported no internet at all.

Information within Myanmar is becoming increasingly difficult to verify.

Some 37 journalists have been arrested, including 19 who remain in detention, the U.N. human rights office said.

While authorities have ordered some newspapers shut, others have apparently been forced to close for reasons of logistics. The last private newspaper stopped publishing on Wednesday. The private Tachilek News Agency in the northeast published photographs of workers cutting cables it said were the fibre links with neighbouring Thailand. However, state-run media has not been affected.

State television said on Wednesday that Suu Kyi was being investigated for bribery in connection with accepting four payments worth $550,000 from a prominent businessman.

Property developer Maung Weik, in comments broadcast in a state television news bulletin, said he had given Suu Kyi four payments, ranging from $50,000 to $250,000 from 2018 to 2020, when she headed the first civilian-led government in decades.

“The anti-corruption commission is investigating,” it added.

Her lawyer dismissed that accusation as a joke. He was not immediately available for comment on Thursday.

Suu Kyi, 75, is hugely popular for her campaign against military rule since 1988, over which she has spent years in detention.

The army defended its coup, saying its accusations of fraud in a Nov. 8 election swept by Suu Kyi’s party were rejected by the electoral commission.

It has promised a new election but not set a date.

Suu Kyi already faces various charges including illegally importing walkie-talkie radios and infringing coronavirus protocols. If convicted, she could be barred from politics.