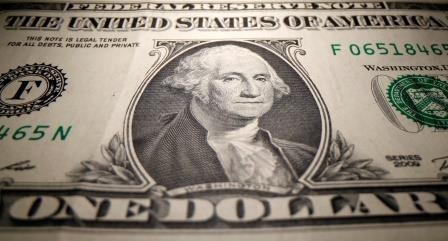 LONDON (UK) – Spiking US bond yields boosted the dollar on Thursday, helping it to revive from two-week lows after the Federal Reserve’s push back against speculation over interest rate hikes.

US 10-year Treasury yields hit their highest levels in 13-months in morning deals in London, climbing above 1.70% for the first time since January 24, 2020.

Fed Chair Jerome Powell dampened speculation the stronger economic outlook could propel the central bank to wind back its stimulus.

The US central bank sees the economy growing 6.5% this year, which would be the largest annual jump in gross domestic product since 1984. Inflation is expected to exceed the Fed’s 2% target to 2.4% this year, although officials think it will move back to around 2% in subsequent years.

“The question remains whether the Fed can actually arrest the latest spike in US Treasury yields especially given that the improvement of US fundamentals will continue,” Valentin Marinov, head of G10 FX research at Credit Agricole in London, said. “The renewed spike of UST yields should continue to support the dollar vs. low-yielders like the euro, yen and the Swiss franc.”

Marinov said the Fed meeting had disappointed dollar bulls and the currency may been seen “nursing its wounds vs. risk-correlated and commodity currencies in the very near term”.

A Nikkei report said the Bank of Japan (BOJ) was expected to slightly widen an implicit band in which it allows long-term interest rates to move around its 0% target.

A Reuters poll this month found two thirds of Japanese firms had expected the BOJ to curb rises in long-term interest rates and keep them steady ahead of the central bank’s review this week on how to make its stimulus policy more sustainable.

The Bank of England is expected later on Thursday to keep its benchmark Bank Rate at a historic low of 0.1% and its bond-buying programme unchanged at 895 billion pounds.

“Similar to what we’ve seen from the Fed, the Bank of England will talk up their prospects of the economy relative to where we’ve been, but at the same time emphasize that we’re still a long way from full recovery,” Rodrigo Catril, senior currency strategist at National Australia Bank in Sydney, said.

“We expect the BoE to gently warn against the shift in market pricing from a rate cut to around 50bps of hikes over the next three years.”

The Australian dollar rose to a two-week high of $0.7849, before trimming some gains. Its New Zealand counterpart briefly lost momentum after the country posted a surprise contraction in GDP in the final three months of last year.

Google to invest $7 billion in offices, data centers across US this year