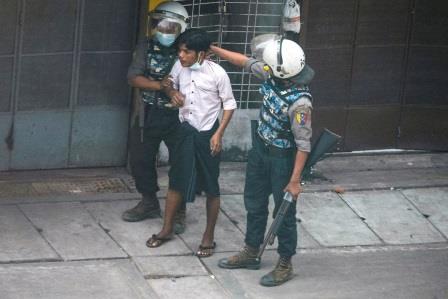 Riot police officers detain a demonstrator during a protest against the military coup in Yangon, Myanmar, March 19, 2021. REUTERS/Stringer

Military and police have used increasingly violent tactics to suppress demonstrations by supporters of detained elected leader Aung San Suu Kyi, but that has not put off the protesters, with crowds turning out again in several towns.

Security forces opened fire in a confrontation in the central town of Aungban as they tried to clear a protesters’ barricade, media and a witness reported.

One protester was killed in the northeastern town of Loikaw, the Myanmar Now news portal said, and there was some shooting in the main city of Yangon, but no word on casualties.

Demonstrators were also out in the second city of Mandalay, the central towns of Myingyan and Katha, and Myawaddy in the east, witnesses and media reported.

The total number killed in weeks of unrest has risen to at least 233, according to the latest report and a tally by the Assistance Association for Political Prisoners activist group.

In an unusually blunt call from a neighbour, Indonesia urged Myanmar to end the violence and restore democracy.

“Indonesia urges that the use of violence in Myanmar be stopped immediately so that there are no more victims,” Indonesian President Joko Widodo said in a virtual address.

“The safety and welfare of the people must be the top priority. Indonesia also urges dialogue, that reconciliation is carried out immediately to restore democracy, to restore peace and to restore stability.”