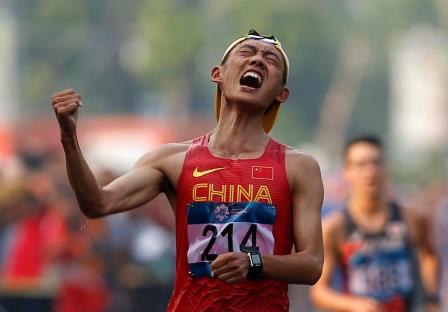 China’s Wang Kaihua created history by becoming the third-fastest in 20 km race at the national championships in Huangshan, romping to victory in one hour, 16 minutes and 54 seconds to book his spot at the Tokyo Olympics.

The Asian Games champion paced himself perfectly from start to finish at the event, which also served as an Olympic qualifier, taking 42 seconds off the national record previously held by 2016 Rio Games champion Wang Zhen.

“My expectation for the race was to break the national record,” the 27-year-old said. “There’s still room for me to improve.”

Only Japan’s Yusuke Suzuki, who set the world record when he clocked 1:16:36 at an event in his home town of Nomi in 2015, and Russian Sergey Morozov (1:16:43) have registered faster times.

“I am confident that I can break the world record one day,” Wang said, adding that he was looking forward to competing in his first Olympics.

“Everything can happen in such a high-level competition. I will go all out to fight for the best result,” he said.