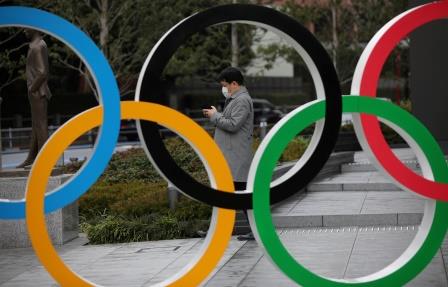 FILE PHOTO: A man looks at his mobile phone next to The Olympic rings in front of the Japan Olympics Museum in Tokyo, Japan, March 4, 2020. REUTERS/Stoyan Nenov//File Photo

TOKYO (JAPAN) – Amid public concerns over the coronavirus, the Olympic Organising Committee is considering barring foreign volunteers from the Games this summer, state media reported on Saturday.

The organising committee may consider allowing the entry of volunteers with specialised skills such as speaking minority languages as an exception, the report also said.

The report came hours ahead of a meeting of Tokyo Olympics organisers who will reportedly discuss whether to allow international spectators.

Media polls show that a majority of the Japanese public are wary about letting in international spectators to watch the Games as the country grapples with the tail-end of a third wave of the coronavirus pandemic.

The office of the Tokyo 2020 Olympic Organising Committee could not be reached for comment.

Tokyo Olympics organisers, including the Tokyo 2020 organising committee, International Olympic Committee, and the central government of Japan will meet from 6 p.m. (0900 GMT) on Saturday.

Sources told Reuters earlier this month that the Japanese government has concluded it will not be able to allow spectators from abroad.

But Tokyo 2020 Organising Committee President Seiko Hashimoto has held off on confirming a decision, saying that she hoped to reach a decision before the start of the torch relay set to start in Fukushima next Thursday.

The Olympic Games, which was delayed last year due to the coronavirus pandemic, is now scheduled for July 23 to Aug. 8, and the Paralympics from Aug. 24 to Sept. 5.