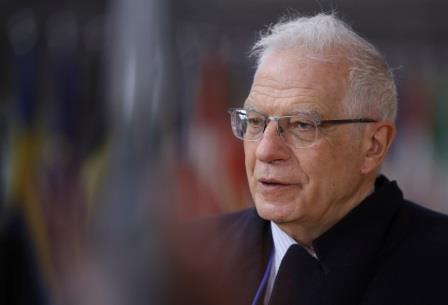 BRUSSELS (BELGIUM): The European Union on Monday slapped sanctions on 11 individuals connected to the coup in Myanmar. The move is considered as one of its most significant response since the military began suppressing protests violently.

The EU’s foreign ministers adopted the travel bans and asset freezes at a meeting in Brussels. The 27-nation bloc already had an arms embargo on Myanmar, and has maintained sanctions against some senior military officers since 2018.

“We are going to take sanctions against 11 persons involved in the coup and the repression of the demonstrators,” EU foreign policy chief Josep Borrell said. German Foreign Minister Heiko Maas told reporters that repression of pro-democracy protesters had reached an unbearable degree.

Among the individuals affected are Min Aung Hlaing, commander-in-chief of the Myanmar military, and Myint Swe, who has been acting president since the coup.

EU diplomats have told Reuters that the bloc is likely to toughen its response soon by barring EU investors and banks from doing business with parts of the military’s business conglomerates, Myanmar Economic Holdings Limited (MEHL) and Myanmar Economic Corporation (MEC).

The conglomerates reach from mining and manufacturing to food and beverages, hotels, telecommunications and banking. They are among Myanmar’s biggest taxpayers, and sought partnerships with foreign companies during Myanmar’s democratic liberalisation.

A UN fact-finding mission in 2019 recommended sanctions against the corporations and their subsidiaries, saying they gave the army extra sources of revenue that could finance human rights violations.