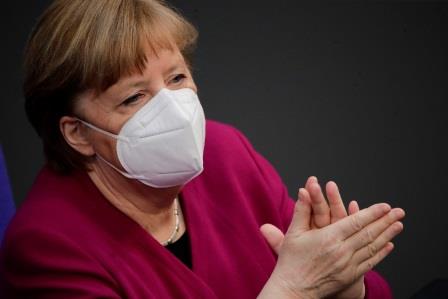 BERLIN (GERMANY): Just a day after she asked the country to forgive her U-turn on a circuit-breaker lockdown over Easter, Chancellor Angela Merkel told Germans that “the light is at the end of the tunnel and we will defeat this virus.” In a firm, 27-minute address to lawmakers on Thursday, she acknowledged how difficult life is for many people but urged them to think positively, arguing that vaccinations offered a way out of the crisis.

Merkel’s decision on Wednesday to drop plans for an extended Easter holiday to try to break a third wave of COVID-19, agreed two days earlier during talks with governors of Germany’s 16 states, raised concerns she had lost her grip on the crisis.

“It will take a few more months, but the light at the end of the tunnel is visible. We will defeat this virus!” she told lawmakers in the Bundestag lower house of parliament.

“Now it’s a matter of gathering strength and moving forward positively, even though the situation is difficult at the moment. That is what I want from everyone in this country,” Merkel said to loud applause.

Germany reported another 22,657 infections on Thursday, while the death toll rose by 228 to 75,440. Deaths have fallen from earlier in the year when vaccinations had not begun, but admissions to intensive care units are creeping up and the seven-day case incidence is now 113 compared with 90 a week ago.

Merkel addressed the Bundestag ahead of an EU leaders’ summit later on Thursday, at which she said they would discuss how to make sure more vaccines are made on European soil.

The European Commission has threatened to ban exports to countries like Britain that have higher vaccination rates but do not export shots to the EU. The aim is to safeguard supplies for the bloc’s own citizens as they face a third wave of the pandemic.

“British production sites are manufacturing for Britain and the United States is not exporting, so we are reliant on what we can make in Europe,” Merkel said.

“We have to assume that the virus, with its mutations, may be occupying us for a long time to come so the question goes far beyond this year,” she added.

Britain and the European Commission said on Wednesday they were discussing how they could work together to create a “win-win” situation on COVID-19 vaccines after the bloc threatened to take tougher measures to curb the export of deliveries of shots.

“There needs to be a ban on exports of European vaccines to countries that produce vaccines themselves and do not supply anything to Europe,” he tweeted.