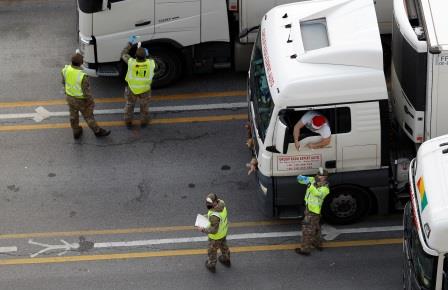 LONDON (UK): Truck drivers entering Britain from continental Europe might have to take a COVID-19 test according to plans being discussed by the government to contain coronavirus variants, an industry source said on Friday.

Prime Minister Boris Johnson suggested earlier this week that Britain might need to tighten restrictions on arrivals from France, including truck drivers, to defend against new variants that are spreading as part of Europe’s third wave of the pandemic.

A similar move by France in December caused chaos in southern England when it was introduced at short notice but the industry believes there is now enough rapid testing available for it not to cause too much of an impact, the source said.

Drivers would be tested at sites around Britain.

“We are carefully monitoring the increase in cases in Europe and will keep all measures under review as we cautiously remove restrictions throughout our roadmap,” a spokeswoman for the government said.

Britain has banned foreign travel until at least May 17, although essential workers such as truck drivers have been allowed to cross borders to supply the country’s food stores and manufacturing plants.

The government currently encourages international drivers in the country for more than 48 hours to take a free test.