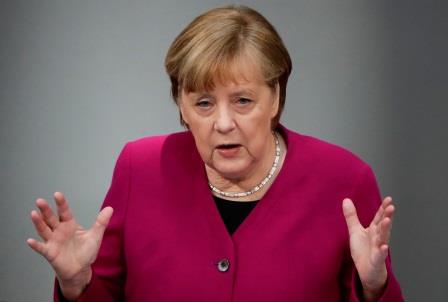 FILE PHOTO: German Chancellor Angela Merkel delivers a speech ahead of the EU summit at the country's parliament, the Bundestag, in Berlin, Germany, March 25, 2021. REUTERS/Hannibal Hanschke

BERLIN (GERMANY): Chancellor Angela Merkel is facing growing criticism for failing to come out with a plan to reverse rising COVID infections in Germany and blaming uncooperative state premiers for an increasingly chaotic management of the crisis.

The clock is ticking for Germany to reverse soaring infections which, according to its top public health official, could jump to 100,000 a day from 20,000 now.

Germany stepped up lockdown measures in December to contain a second wave of infections, which has now turned into a third wave although with fewer deaths.

Merkel raised the possibility during a broadcast interview on Sunday of amending the Infection Protection Act to oblige Germany’s 16 states, which wield power over health and security issues, to implement certain measures.

But she failed to say what that would entail, prompting rebukes from opposition parties and newspapers that she was “clueless” and “still has no plan”.

Merkel, whose conservatives are falling in the polls ahead of an election in September, expressed dissatisfaction with some state premiers for failing to reverse measures to reopen parts of the economy when cases start to rise, as agreed on March 3.

“Merkel should appear before parliament and state clearly how she sees the situation and what her proposals are,” Christian Lindner, leader of the opposition Free Democrats, told Phoenix television.

In the clearest sign that her authority is waning six months before her fifth and last term ends, Merkel said the leader of her Christian Democratic Union (CDU) party had breached the March agreement by failing to reimpose lockdown measures in his own state of North Rhine-Westphalia (NRW).

NRW premier Armin Laschet, who is also a potential conservative candidate for chancellor, hit back at Merkel on Monday, saying his state had imposed a so-called “emergency break” by requiring people to test negative before visiting some shops.

“I am open to every proposal from the federal government on what we could do better,” said Laschet, adding that the crisis summits between Merkel and state premiers held by video should be in person to bring better results.

Most state leaders have rejected Merkel’s plans to shut schools and day care centres if infections surge and many have chosen to keep many shops, garden centres and hairdressers open even as the 7-day incidence rate per 100,000 jumped to 134.

Asked on Sunday whether she had lost her authority and ability to govern, Merkel replied: “No.”

But frustrations over a sluggish vaccination campaign, a face mask corruption scandal involving two conservative lawmakers and the lack of a clear timetable out of the crisis are expected to hand Merkel’s conservative bloc their worst-ever election result in September.

Merkel caused confusion last week when she ditched a decision to prolong the Easter holiday by a day in an attempt to break the third wave. Many saw her ensuing apology as insufficient to reassure an increasingly sceptical public.

Der Spiegel Magazine summed up Merkel’s televised interview as such: “Her apology was very impressive. But Merkel has shown that she has no plan.”