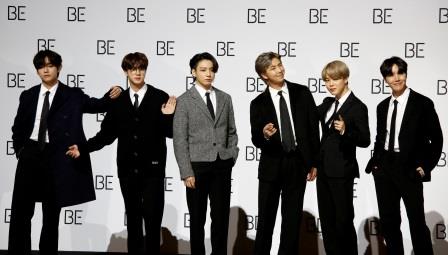 SEOUL (SOUTH KOREA): BTS, South Korea’s K-pop music group called for an end to anti-Asian racism and said they had also suffered racist abuse which had made them feel powerless and hurt their self esteem.

BTS, the first K-pop group to ever receive a Grammy Award nomination, made the appeal in a statement posted on Twitter along with hashtags #StopAsianHate and #StopAAPIHate.

In an apparent reference to the shootings in Georgia, Atlanta, on March 16, where six out of eight victims were Asian, the group wrote: “We send our deepest condolences to those who have lost their loved one.”

The shootings have stoked fears among those in the Asian-American Pacific Islander community, which has reported a spike in hate crimes since March 2020 when then-President Donald Trump began referring to COVID-19 as the “China virus.”

The seven-member BTS, which last year had three No. 1 on the Billboard Hot 100 chart, also said they had faced racist abuse, including enduring expletives, being mocked for the way they look, and being asked why Asians were speaking English.

“Our own experiences are inconsequential compared to the events that have occurred over the past few weeks,” the statement said. “But these experiences were enough to make us feel powerless and chip away our self-esteem.”

“What is happening right now cannot be dissociated from our identity as Asians,” BTS wrote. The group also said it condemned violence and stands against racial discrimination.

Last year BTS donated $1 million to Black Lives Matter (BLM) in support of U.S. protests against police brutality, prompting their fan base to raise enough to match that donation in just 25 hours.