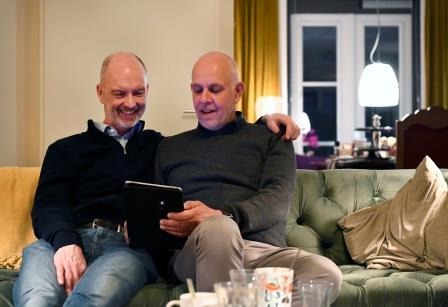 They were among four gay couples – three male and one female – to be married shortly after midnight by the mayor of Amsterdam on April 1, 2001.

On Thursday, they celebrated their 20th anniversaries in small groups or at home due to COVID-19 social distancing rules that prevented large gatherings.

“It’s nicer to say to other people ‘he’s my husband, he’s my man’,” said Dolf, sitting next to Gert as they flipped through an album of photos and newspaper clippings of the wedding, which made headlines worldwide. “It has helped me to accept myself.”

All four gay marriages have passed the test of time. One of the men, Frank Wittebrood, died of a heart attack in 2011 at 55.

Those who participated looked back with pride at having made legal history.

“People told me that the Netherlands would be the first and the last country (to pass same-sex marriages), the rest of the world won’t follow you,” said Henk Krol, a lawmaker who supported the bill when it passed the Dutch parliament in 2000.

“Almost 30 countries in the world followed the Dutch example,” he said.

Most European Union countries, Britain, the United States, Australia, Mexico and South Africa are among 29 nations to have legalised same-sex marriage since 2001.

“I’m very proud that it’s possible,” said Gert, who before he could complete his sentence had Dolf jump in and finish it: “that we could play a little part of it. We made history.”