Russia says that sanctions on junta may lead to civil war, EU has different plans 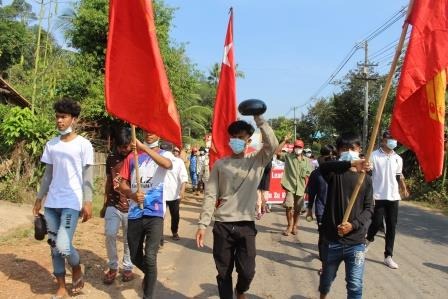 MOSCOW(RUSSIA) – Russia has expressed its doubts regarding the sanctions being provided to the military junta as there are chances of a civil war to take place in Myanmar in such a situation. However, France said the European Union will step up restrictions on the generals.
The Kremlin’s show of support was a boost to the junta that overthrew Aun San Suu Kyi’s elected civilian government on Feb. 1. But it still faces a sustained campaign of pro-democracy demonstrations and civil disobedience across the country, and condemnation and more sanctions from the West.
In Myanmar’s main city Yangon on Tuesday, protesters sprayed red paint on roads, symbolising the blood shed in a crackdown by the security forces.
“The blood has not dried,” said one message in red.
About 570 people, including dozens of children, have been shot dead by troops and police in almost daily unrest since the coup, and security forces have arrested close to 3,500 people, advocacy group the Association for Political Prisoners (AAPP) said.
However, Russia said on Tuesday that sanctions against the authorities were futile and extremely dangerous.
“In fact, such a line contributes to pitting the sides against each other and, ultimately, pushes the people of Myanmar towards a full-scale civil conflict,” the Russian Foreign Ministry said, quoted by the Interfax news agency.
Russia is a major arms supplier to Myanmar and its deputy defence minister met coup leader General Min Aung Hlaing in the capital Naypyitaw last month, drawing criticism from rights activists who accused Moscow of legitimising the junta.
The European Union was preparing to impose collective sanctions on the Myanmar military targeting its business interests, French Foreign Minister Jean-Yves Le Drian said in Paris.
“We are going to add economic sanctions at the level of the 27 against the economic entities linked to the army so that they (sanctions) can be applied very quickly,” Le Drian told lawmakers.
The EU last month imposed sanctions on a number of figures linked to the coup and the subsequent repression, while the United States has also taken measures against individuals and military-run businesses, which cover a wide span of Myanmar’s economic life.
A protest scheduled for Wednesday has called for the burning of Chinese-made goods. Many protesters are opposed to China, a major investor in Myanmar, because it is seen as supporting the junta.