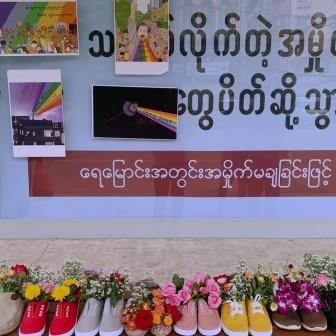 NAYPYIDAW (MYANMAR): Anti-coup demonstrators in Myanmar bounced back with hunting rifles and firebombs to face a crackdown by security forces in a town in the northwest. However, at least 11 of the protesters were killed, reported domestic media reported on Thursday.

The protesters fought back with guns, knives and firebombs, five more truckloads of troop reinforcements were brought in.

Fighting stretched into Thursday morning and at least 11 protesters were killed and about 20 suffered injuries, said the media. There was no word of any casualties among the soldiers.

According to the Assistance Association for Political Prisoners (AAPP), this would take the toll of civilians who lost their lives in the encounter by security forces to over 600 since February 1. It had a toll of 598 dead as of Wednesday evening.

Taze is near the town of Kale, where at least 11 people were killed in a similar clash on Wednesday, as per news media and witnesses. Security forces levelled live rounds, grenades, and machine-guns on protesters seeking the restoration of Suu Kyi’s government, AAPP said.

The government on Thursday arrested Paing Takhon, a model and actor who had voiced remarks against the coup, his sister said. In Yangon, the country’s biggest city, activists were seen putting shoes filled with flowers to commemorate dead protesters.

AAPP has said 2,847 people were currently under detention.

Paing Takhon, 24, a model and actor, renowned in Myanmar and Thailand, was one of the latest celebrities to be detained.

His sister, Thi Thi Lwin, told that the military detained her brother at 4.30 am at their parents’ home in Yangon. She said that she had been staying there for several days while unwell, due to malaria and a heart condition.

The security forces came with eight military trucks and about 50 soldiers and it was not clear as to where he had been taken, she said.

Myanmar’s ambassador to London Kyaw Zwar Minn said he was locked out of the embassy. According to sources, his deputy had shut him out and taken charge on behalf of the military.

“It’s a kind of coup, in the middle of London… you can see that they occupy my building,” he told.

Fitch Solutions said in a report that Western sanctions targeting the military were not likely to triumph in bringing back democracy, but said the army was spiralling.

It predicted a violent revolution pitting the military against an armed opposition comprised of members of the anti-coup movement and ethnic militias.

“The escalating violence on civilians and ethnic militias show that the Tatmadaw (military) is increasingly losing control of the country,” it said.

The United Nations’ special envoy for Myanmar, Christine Schraner Burgener, is planning to visit the country in the next few days, a UN spokesman said in New York.