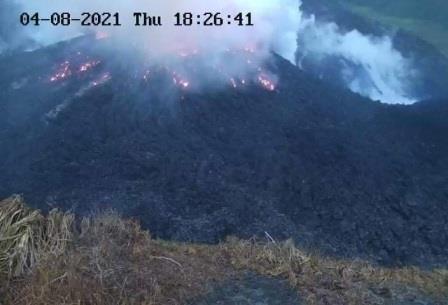 HAVANA (CUBA): The La Soufriere volcano which was dormant for decades, erupted with an explosion on the eastern Caribbean island of St. Vincent early on Friday. The volcano started showing signs of new activity in December which picked up this week. The eruption spread ash across surrounding villages, the University of the West Indies Seismic Research Centre said.

Ralph Gonsalves, Prime Minister of St. Vincent and the Grenadines, ordered an evacuation of the surrounding area late on Thursday.

The eruption sent dark ash plumes of up to 8 km (five miles) billowing into the sky and ash fall was recorded even at the Argyle International Airport, according to St. Vincent’s National Emergency Management Organisation (NEMO).

Those living near the volcano had started evacuating on Thursday via ships and by road.

“People are still being evacuated from the red zone, it started yesterday evening and into last night,” said Lavern King, 28, a volunteer at shelters in the capital Kingstown and elsewhere. “The place in general is in a frenzy.”

St. Vincent and the Grenadines, which has a population of just over 100,000, has not experienced volcanic activity since 1979. An eruption by La Soufriere in 1902 killed more than 1,000 people. The name means “sulfur outlet” in French.

Local media have in recent days also reported increased activity from Mount Pelee on the island of Martinique, which lies to the north of St. Vincent beyond St. Lucia.