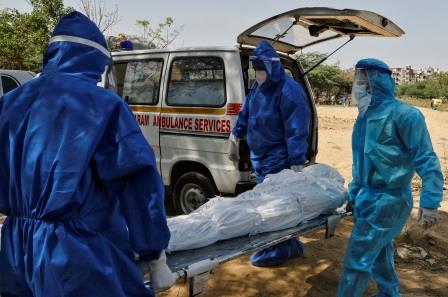 FILE PHOTO: Health workers carry the body of a man who died from the coronavirus disease (COVID-19), for burial at a graveyard in New Delhi, India, April 9, 2021. REUTERS/Danish Siddiqui

South Asia – India, Bangladesh, Pakistan, Bhutan, Nepal, Maldives, and Sri Lanka – accounts for 11% of global cases and almost 6% of deaths. The region accounts for 23% of the world’s population of 7.59 billion people.

India, the country with the third-highest coronavirus total, accounts for over 84% of South Asia’s cases and deaths.

The world’s second-most populous country reported 145,384 new cases on Saturday, the fastest climb in the world and the country’s fifth record this week, as well as 794 deaths. The government blames the current spike on crowding and a reluctance to wear masks.

India is accounting for one in every six reported infections in its current surge.

While ramping up its vaccination drive, inoculating about 4 million people a day, several states said they were rationing doses as the federal government was not refilling stocks in time.

India’s western neighbour Pakistan, the second-hardest hit in the region, is in its third wave, recording more than 700,000 cases and 15,000 related deaths.

It has seen a sharp rise in cases in the past 10 days. Officials say there are now more people in intensive care than at any other point during the pandemic.

Bangladesh, India’s eastern neighbour, is reporting about 7,000 cases a day, totalling some 678,937 cases.

At least 94.1 million people had received their first COVID-19 vaccine dose in southern Asia by Friday, according to figures from Our World in Data.