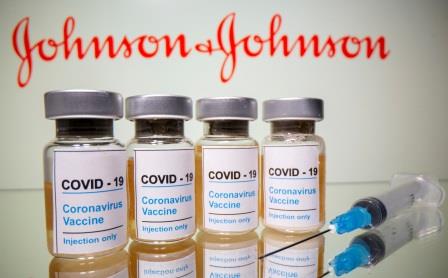 FILE PHOTO: Vials with a sticker reading, "COVID-19 / Coronavirus vaccine / Injection only" and a medical syringe are seen in front of a displayed Johnson & Johnson logo in this illustration taken October 31, 2020. REUTERS/Dado Ruvic

ATHENS (GREECE): Greece is all set to start inoculating people next week as it will get its first set of the single-dose Johnson & Johnson COVID-19 vaccine, said a senior health ministry official on Monday.

The Greek statement came as the U.S. company began delivering its vaccine to countries across the EU, a few days later than initially planned due to production issues.

“We will receive the first 33,600 doses of the single-dose vaccine by Johnson & Johnson on Wednesday, April 14,” the country’s secretary general in charge of vaccinations, Marios Themistocleous, told a weekly briefing.

Greece has inoculated more than 2 million of its 11 million population with at least one shot of the Pfizer, AstraZeneca or Moderna vaccines.

Along with new deliveries from those companies, Greece has said it expects 1.3 million doses of the Johnson & Johnson vaccine by June.

The country has fared better than other EU countries in the first wave of the pandemic but has imposed strict restrictions since November to deal with a resurgence of infections and ramped up vaccinations only recently.

Last week, it began distributing hundreds of thousands of free home testing kits to senior high school students and their teachers before they resume in-class lessons on Monday.

Greece, which had emerged from a multi-year recession before the pandemic broke out, is keen to reopen its tourism and other key sectors of its economy before the summer season.