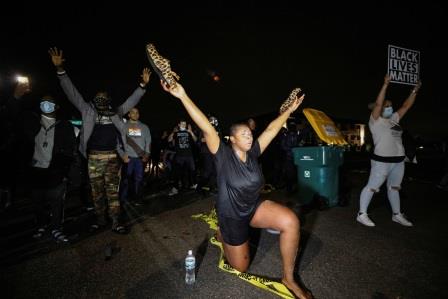 A woman who was tear gassed while confronting police raises her arms outside Brooklyn Center Police Department after police allegedly shot and killed a man, who local media report is identified by the victim's mother as Daunte Wright, in Brooklyn Center, Minnesota, U.S., April 11, 2021. REUTERS/Nick Pfosi

BROOKLYN CENTER, Minn. (US): “We will get to the bottom of this,” said Brooklyn Park Mayor Mike Elliott. He told a briefing, on the death of young Black man who was shot at by the police during a traffic stop, while acknowledging that the death came at a time the community was on edge with the trial of Derek Chauvin underway nearby.

“I want to say that our hearts are aching right now,” said Elliott. “We are in pain right now. And we recognize that this couldn’t have happened at a worse time. “We will do all that is in our power to make sure that justice is done for Daunte Wright.”

The shooting on Sunday caused unrest in Brooklyn Center, Minnesota, hours before the resumption of the trial of Chauvin, the former white Minneapolis police officer charged with murdering George Floyd. The trial began its 11th day on Monday in a courtroom less than 10 miles (16 km) away from the incident.

Wright’s mother, Katie Wright, told reporters on Sunday she had received a call from her son on Sunday afternoon telling her that police had pulled him over for having air fresheners dangling from his rear-view mirror, which is illegal in Minnesota. She could hear police tell her son to get out the vehicle, she said.

In a statement, Brooklyn Center police said officers pulled over a man for a traffic violation just before 2 p.m., and found he had an outstanding arrest warrant. As police tried to arrest him, he got back in the car. One officer shot the man, who was not identified in the statement. The man drove several blocks before striking another vehicle and dying at the scene.