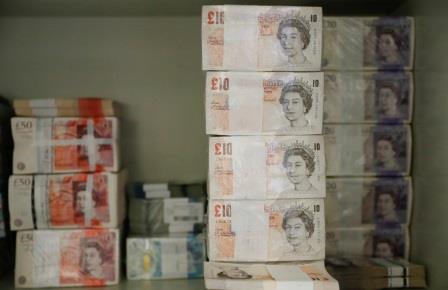 LONDON (UK): After the Bank of England said its chief economist will leave the central bank later this year, the UK pound continued it’s near two-month low against the dollar and nursed losses against the euro on Tuesday.

While the reaction in currency markets was muted, with the pound holding close to the day’s lows against its main rivals, Haldane’s exit is widely seen as a departure of one of the more hawkish figures at the central bank.

Haldane has been the most upbeat member of the BoE’s Monetary Policy Committee on prospects for a sharp economic recovery from the COVID-19 pandemic and in February likened inflation to a tiger that could easily be roused.

“I think Haldane being considered a hawk in the MPC camp is the reason why the pound has struggled today,” said TF Global Markets analyst Fawad Razaqzada.

“People bullish on the pound are not taking any chances, as he could be replaced by a dovish policymaker.”

Against the euro, the pound held below the day’s lows at 86.87 pence. It hit a more than six-week low of 87.12 pence earlier, Refinitiv data shows.

Money market futures were broadly unchanged on the news, with interest rate futures expecting the Bank of England to keep rates unchanged until mid-2022.

Britain has offered all over-50s a first dose of COVID-19 vaccine as the rollout of Moderna’s shot in England began on Tuesday, the government said, adding that it was on track to give a shot to all adults by the end of July.

Sterling has been among the best-performing G10 currencies this year, enjoying its strongest quarter against the euro since 2015. The pace of Britain’s vaccination drive has led analysts to bet on a quick economic rebound from the country’s worst contraction in 300 years.

The pound lost 1% against the dollar last week as Britain proposed to use alternatives to the Oxford-AstraZeneca COVID-19 vaccine to inoculate people aged under 30. Britain has largely depended on the AstraZeneca vaccine to vaccinate more than half of its population.