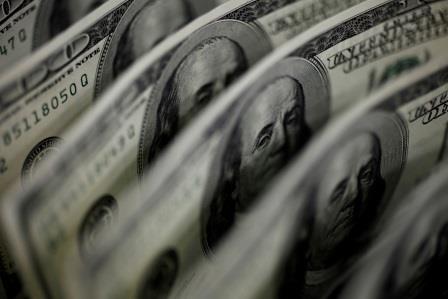 NEW YORK (UK): After data showed inflation making strong gains in March, the US dollar fell to three-week lows on Tuesday. The dollar briefly spiked on the data, before reversing course and dipping to three-week lows. Treasury yields also fell after the data.

The consumer price index jumped 0.6% last month, the largest gain since August 2012, after rising 0.4% in February, the Labor Department said on Tuesday. Excluding the volatile food and energy components, the CPI rose 0.3%. The so-called core CPI nudged up 0.1% in February.

“It keeps unchanged the outlook of the Fed to stay the low rate course over the foreseeable future,” said Joe Manimbo, senior market analyst at Western Union Business Solutions in Washington D.C. “We’re likely to see inflation move higher, before it eventually moves lower. So far the economy is sticking to the Fed’s script.”

Inflation is expected to show extra bullish comparisons to last year in the coming months due to a drop in price pressures in 2020 when businesses closed due to the spread of COVID-19.

The U.S. central bank has said that it will look through temporary increases in inflation and analysts expect it will allow inflation to run hotter than previously expected before raising rates.

The next major U.S. economic release will be retail sales data for March on Thursday.

The Australian dollar, which is a proxy for global risk appetite, was little changed on the day at $0.7623.

The New Zealand dollar gained 0.20% to $0.7042. The country’s central bank is expected on Wednesday to leave interest rates and its quantitative easing program unchanged.

Bitcoin hit a record $63,275, extending its 2021 rally to new heights a day before the listing of Coinbase shares in the United States.