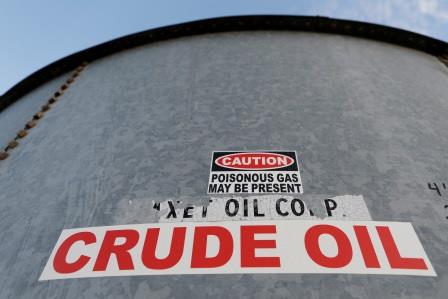 FILE PHOTO: A sticker reads crude oil on the side of a storage tank in the Permian Basin in Mentone, Loving County, Texas, U.S. November 22, 2019. REUTERS/Angus Mordant

LONDON (UK): Global oil prices could hit $40 a barrel by 2030 if governments push to reduce fuel consumption in step with UN-backed plans to limit global warming, pointed out a leading energy consultancy on Thursday.

In a report outlining a scenario where the world acts decisively to tackle greenhouse gas emissions by electrifying transport and industry, Edinburgh-based Wood Mackenzie said oil consumption would begin a steep drop as early as in 2023.

The decline in demand would accelerate to a rate of 2 million barrels of oil per day (bpd) to reach 35 million bpd by 2050, accounting for a 60% drop in carbon emissions from oil use from today’s levels.

Oil consumption hit a record of around 100 million bpd in 2019 and is expected to recover strongly this year after cratering last year due to the coronavirus epidemic.

As a result, oil prices would begin to slip later this decade, WoodMac said in its report. Under its Accelerated Energy Transition scenario, it expects Brent crude prices to average $40 per barrel by 2030, compared with current prices of around $65 a barrel.

“If we move to keep global warming to the 2 degrees Celsius limit set by the (UN-backed) Paris Agreement, the energy matrix will change – and change profoundly,” said WoodMac’s Ann-Louise Hittle.

The world’s current policies are nevertheless far from aligned with the Paris agreement, with temperatures currently on course to rise by 3 degrees Celsius from pre-industrial levels by 2100, WoodMac stressed.

A rapid decline in demand also means that existing sources of oil supplies would be sufficient to meet all future demand, with only limited need for new oifield developments, WoodMac said.

A sharp fall in oil demand and prices in the coming decades would have a profound impact on major oil producers such as members of the Organization of the Petroleum Exporting Countries, WoodMac said.

“The steep fall in demand prevents those key oil producers from managing the market and supporting prices in the way it does today. Despite losing their price-setting ability, however, low-cost Middle East OPEC producers remain core providers of oil.”

Gas demand in Asia would increase on average by 1.5% a year through to 2050, offsetting declines in more mature markets, which would be switching to renewables from gas.