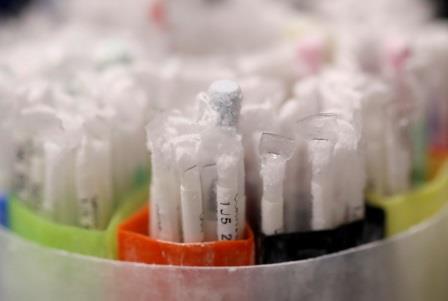 FILE PHOTO: Frozen vials of sperm are seen preserved in an azote cooled container in a laboratory in Paris, France, September 13, 2019. REUTERS/Christian Hartmann

STOCKHOLM (SWEDEN): Sweden is facing an acute shortage of sperm for assisted pregnancy as would-be donors are avoiding hospitals due to COVID-19. This has halted inseminations in large parts of the healthcare system and driving up waiting times by years.

“We’re running out of sperm. We’ve never had so few donors as during the last year,” said Ann Thurin Kjellberg, head of the reproduction unit at Gothenburg’s University Hospital.

The shortage has meant waiting times for assisted pregnancy have shot up from around six months to an estimated 30 months in the past year, possibly longer, doctors familiar with the matter told Reuters.

“It’s stressful that we can’t get a clear time or date for treatment,” said Elin Bergsten, a 28-year-old maths teacher from southern Sweden.

Two years ago, Bergsten and her husband learned he was unable to produce semen, and the pair immediately applied for assisted pregnancy. She was due to have her second cycle of insemination before her treatment was indefinitely delayed due to the shortage.

“It’s a national phenomenon,” Thurin Kjellberg said. “We’ve run out in Gothenburg and Malmo, they will soon run out in Stockholm,” she added, naming the three most populous areas of the country.

Beyond public healthcare providers, there are also private clinics in Sweden which are able to circumvent shortages by buying sperm from abroad.

But assisted pregnancy treatment there often costs as much as 100,000 Swedish crowns ($11,785), making it unaffordable for many. Assisted pregnancy is free within Sweden’s national health service.

The Nordic countries and Belgium have the highest assisted conception rates in the world, in terms of availability of cycles per million of population, according to the European Society of Human Reproduction and Embryology.

Under Swedish law, a sperm sample can only be used by a maximum of 6 women. Most donated sperm in Sweden has reached this legal capacity, meaning that in many areas, assisted pregnancy is only available for women who have used a specific sperm sample before.

Margareta Kitlinski, who runs the reproduction unit at Skane University Hospital, the largest such clinic in Sweden, said it takes around 8 months to process a donor due to the many tests involved, and that many samples fail to become viable donations due to common problems in freezing.

“If you have 50 men contact you, at best only half of them could be donors,” Kitlinski said.

Some Swedish regions have taken to social media to encourage potential male donors, but with varying results. In the meantime, the shortage lingers.

“We need to go on TV and tell Swedish men to come forward,” Thurin Kjellberg said.