US mass shooting: At least eight slain at Indianapolis FedEx facility in latest 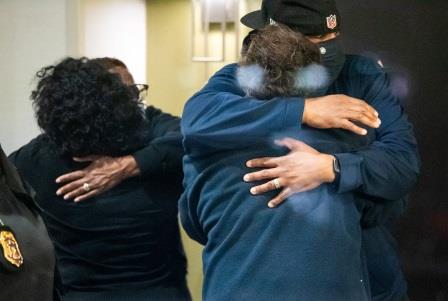 People embrace after learning that their loved one was safe after a mass casualty shooting at the FedEx facility in Indianapolis, Indiana, U.S. April 16, 2021. Mykal McEldowney/IndyStar/USA Today Network via REUTERS

Atleast eight people were shot at a FedEx facility in Indianapolis and several others were wounded by gunman before taking his own life, police said early on Friday.

At least 30 people have been killed in US mass shootings in the last month alone, reigniting a fiery debate over gun control and the US constitutional right to bear arms as the country struggles to emerge from a lingering coronavirus pandemic.

The latest rampage unfolded at a FedEx operations center near the Indianapolis International Airport, after 11 pm local time on Thursday night.

A worker at the air freight fatality told local television station WRTV that he was eating when he heard what sounded like “two loud metal clangs” followed by more shots.

“Somebody went behind their car to the trunk and then got another gun,” he said, adding: “Then I saw one body on the floor.”

“Preliminary information is that the alleged shooter has taken his own life here at the scene,” she said.

Five people were taken to hospitals with gunshot wounds, while “multiple” others had walked into hospitals nearby. Two more were treated at the facility itself by medical staff and released, according to the police.

One of the people taken to a hospital was in critical condition, Cook said.

No further information about the victims, the suspect or the suspect’s possible motive was immediately available.

A White House official said President Joe Biden will be briefed on the shooting on Friday morning.

Earlier in April, weeks after taking office, President Joe Biden announced limited measures to tackle gun violence that included a crackdown on self-assembled “ghost guns.” It may prove much more difficult to enact more stringent federal gun control measures, which require the support of Congress and face fierce opposition from many Republicans.

The Indianapolis police department’s deputy chief, Craig McCartt, told media that police did not fire any shots in the incident.

“There seems to be a lack of conflict resolution skills and people are way too quick to pick up a gun and solve their problems with a gun today,” he said. “But everyone should be concerned about the frequency that these are happening.”

Television footage showed victims’ families, friends and work colleagues, all with face masks on due to the pandemic and most holding their mobile phones, at a “family unification center” set up by authorities in a nearby hotel.

A FedEx spokesman said the company was “deeply shocked and saddened” by the loss of its team members. He did not clarify if all those killed were FedEx employees.

“Our most heartfelt sympathies are with all those affected by this senseless act of violence. The safety of our team members is our top priority, and we are fully cooperating with investigating authorities,” he added.

Indianapolis Mayor Joe Hogsett wrote on Twitter early on Friday: “This morning, Indianapolis residents are confronted with the horrific news of yet another mass shooting, an act of violence that senselessly claimed the lives of eight of our neighbors.”