India: All adults to get COVID-19 vaccines as cases surge 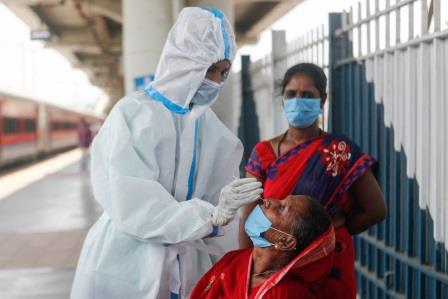 FILE PHOTO: A healthcare worker in personal protective equipment (PPE) collects a swab sample from a woman, amidst the spread of the coronavirus disease (COVID-19), at a railway station in Mumbai, India, April 16, 2021. REUTERS/Francis Mascarenhas

NEW DELHI (INDIA): All citizens over 18 will be permitted to get the COVID-19 vaccinations from May 1, the government said on Monday.

Facing growing criticism over its handling of the second wave of the pandemic, Prime Minister Narendra Modi’s administration said vaccine manufacturers would have to supply 50% of doses to the federal government and the rest to state governments and the open market at a pre-declared price.

Daily COVID-19 cases in India jumped a record 273,810 on Monday, and deaths rose a record 1,619 to 178,769. Hospitals have a shortage of beds, oxygen and key medicines, and infections have passed 15 million, the world’s second highest total after the United States.

“If a lockdown isn’t implemented now, the situation will go beyond control,” Chief Minister Arvind Kejriwal told a virtual media briefing on Monday.

Criticism of Modi’s administration has increased as he continued to address large state election rallies and let Hindu devotees congregate for a festival.

Kejriwal had said on Sunday that fewer than 100 critical care beds were available in the city of New Delhi, which has a population of more than 20 million people, and social media were flooded with complaints.

New Delhi joined 13 other Indian states that have decided to impose restrictions, curfews or lockdowns in their cities, including the richest state of Maharashtra and Modi’s home state of Gujarat, where the industrial city of Ahmedabad is also grappling with a shortage of beds.

Hong Kong said late on Sunday that the Asian financial hub will suspend flights from India, Pakistan and the Philippines from Tuesday for two weeks.

Britain has put India on a travel “red-list” and Prime Minister Boris Johnson cancelled a planned trip to India next week.

As of Monday, India had administered nearly 123.9 million vaccine doses – the most in the world after the United States and China, though it ranks much lower in per capita vaccination.

The current vaccination process is controlled by the federal government. Liberalising it would augment vaccine production and availability, and attract new domestic and international vaccine manufacturers, the government said in its statement.

“It would also make pricing, procurement, eligibility and administration of vaccines open and flexible, allowing all stakeholders the flexibility to customise to local needs and dynamics,” it said.