Ahead of trade talks UK downplays criticism of Australian minister 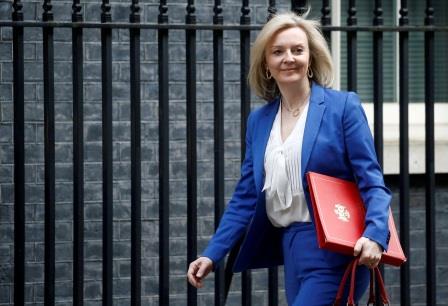 LONDON (UK): After the Daily Telegraph newspaper cited a source complaining of slow progress in the talks, calling Tehan inexperienced compared with Truss and saying: “He needs to show that he can play at this level,” Britain on Wednesday downplayed the report, with British counterpart Liz Truss promising he would get a warm welcome in London for talks.

Tehan is due to arrive this week for talks on a trade deal that Britain is pursuing as one of the pillars of its post-Brexit strategy to build stronger commercial and diplomatic links in the Indo-Pacific region.

“She (Truss) plans to sit him down in the Locarno Room (in the foreign office) in an uncomfortable chair, so he has to deal with her directly for nine hours,” the report quoted the source as saying.

Asked about the Telegraph report, a British trade department official said the comments were “over the top” and that while Britain was concerned at the pace of talks, they hoped significant progress could be made during Tehan’s visit.

“The Australians are really, really close mates of ours and there’s a lot of mutual respect between Liz and Dan,” the official said. “Dan’s been around the block and is pretty experienced so he will know not to read too much into it.”

Truss later said in a statement: “I’m looking forward to giving Minister Tehan a warm welcome and building on the good progress we have already made.”

The official said the government was looking for movement from Australia on the services and investment sections of the deal and that while a breakthrough could allow an agreement in principle to be reached within days, it was more likely to take weeks to finalise the whole deal.

Britain has estimated a trade deal with Australia could add 500 million pounds ($696 million) to UK economic output over the long run and is confident that a deal can be completed in the first half of 2021.